Sabu and Jam's co-producer, Shintaro Akiyama, appeared the night before their film opened in Japan.  ©FCCJ

It is not essential to know everything — or even much at all — about LDH Pictures before watching Sabu’s new film, Jam. But for those of us who became ardent followers of Japanese indie film after discovering his hilariously dark, high-speed, genre-blending comedies in the 1990s, it comes as a bit of a jolt to hear that the heralded director is now one of them.

“Them” is LDH World, a powerful artist management agency and related empire spanning music, dance, theater and most recently, films. Under the leadership of Chief Creative Officer Exile Hiro (ne Hiroyuki Igarashi), the firm launched LDH Pictures in 2016 and began actively producing and distributing films featuring its huge stable of talent. Its contract with Sabu assures that one of Japan’s most distinctive auteurs will continue to be funded and reach appreciative audiences, many of whom are overseas, with his work.

Sabu has been feted with awards and retrospectives around the world since his 1996 feature debut, Dangan Runner, which established his uniquely kinetic, blackly humorous style. He has continued to explore themes of fate and faith, guilt and retribution, coincidence and karmic payback in such films as Postman Blues (1997), The Blessing Bell (2002), Miss Zombie (2013) and Chasuke's Journey (2015); but like all singular filmmakers, he has had to contend with increasing budget challenges and a shrinking theatrical marketplace. 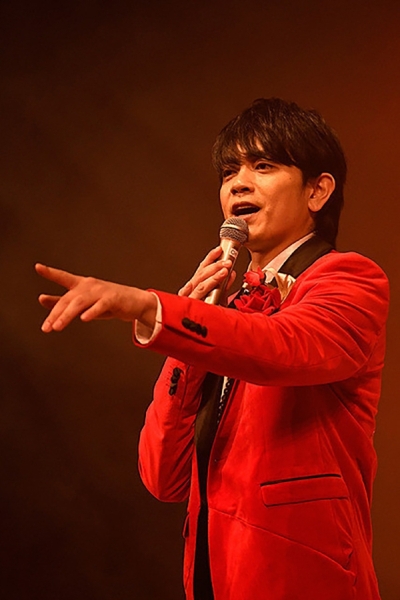 LDH manages the enormously popular Exile performing group, many of whom appear in Jam. Sabu had first worked with Exile star Sho Aoyagi on his 2017 film Mr. Long, and as he told the FCCJ audience, “[At that time] I had several discussions with LDH about projects that we wanted to do together, but they didn’t come to fruition. In the meantime, they asked me to come up with some ideas for a film featuring Mr. Aoyagi and other members of the Exile group, and that’s how this came about.”

Jam co-producer Shintaro Akiyama, who also plays the role of a friendly-but-dimwitted thug in the film, explained, “It all started with my boss, the executive producer of this film, Hiro. He very passionately approached Sabu to sign with LDH.”

Demonstrating impressive English skills, Akiyama briefly outlined LDH World’s global ambitions, with new branches and training schools now running in Asia, Europe and the US. Among other milestones, he noted, “Our actors and artists are branching out overseas, and one of them, Naoki, will be starring in a Netflix Hollywood movie. I look forward to starring in my own Hollywood film soon.”

(Exile members often use first names only. “Naoki” is Naoki Kobayashi, who appeared at FCCJ in 2017 with the very first LDH Pictures film, Tatara Samurai. He moved to Los Angeles shortly afterward, and stars in Wash Westmoreland’s 2019 Earthquake Bird with Alicia Vikander and Riley Keough.)

Akiyama appeared in the first-ever Exile stage production in 2007, and is now co-producing as well as eyeing his own directorial debut, based on one of his novels. ©FCCJ

The LDH focus prompted one audience member to ask whether Sabu still had the freedom to make films on his own terms. “My contract allows me to do as I please,” Sabu reassured him. “The only stipulation is to use LDH artists whenever possible. I don’t feel restricted in any way, and I haven’t been told to focus on certain genres. They also haven’t asked me to target the Japanese market — on the contrary, they want to make films that will appeal to international film festivals and overseas markets.”

Jam is precisely that type of film. A bittersweet confection in which three lives collide and converge after random chance and a series of fateful encounters, it eventually erupts into one of Sabu’s trademark foot chases, made even more mirthful by the addition of drone shots. 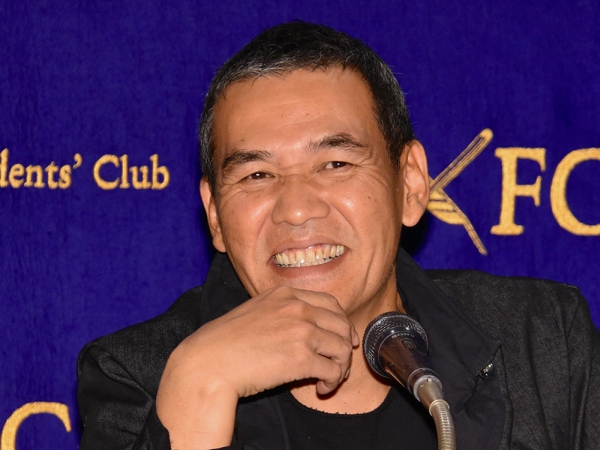 Hiroshi (Sho Aoyagi, almost too convincing in his role) is a jaded, small-time enka singer who holds “Talk to Me” sessions after each of his shows, building a real-world fan base that would normally spring up spontaneously on social media. “These events are essential to going global,” he tells the middle-aged women who flock to his shows. Meeting personally with them seems to work, though: he has a huge following of ardent admirers, each vying to know more about him and his work than the next.

After a series of “secret live” gigs at the Oldies but Goodies Jukebox bar, two of Hiroshi’s fans get into a contretemps over the order of his set list, one suggesting that he should swap one song for another that is more upbeat; and the other defending Hiroshi’s artistry. “Real fans should respect his song choice,” she insists. 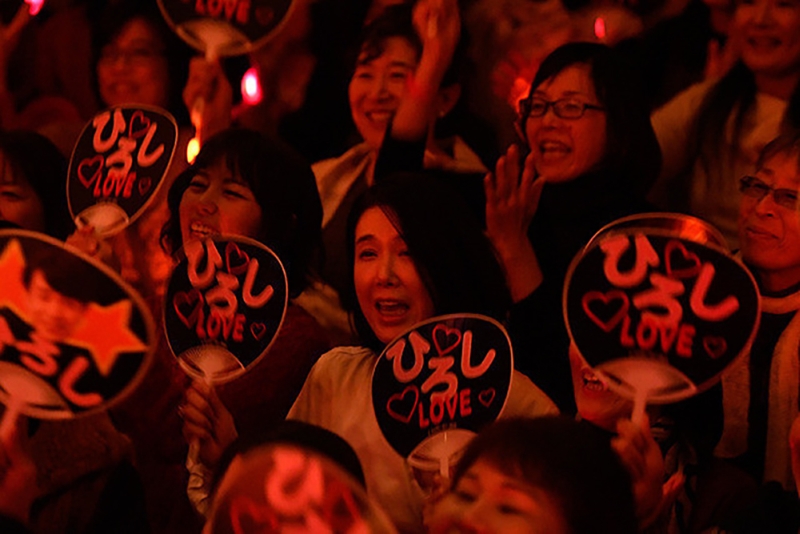 The marvelous Mariko Tsutsui is Hiroshi's No. 1 fan. ©2018"jam"Production Committee

This real fan, Masako (Mariko Tsutsui, of Harmonium, relishing the part), waits for Hiroshi after the show and assures him, “I won’t let anyone denigrate your art.” She then does the only logical thing: drugs and kidnaps him. She gets unexpected help from a friendly young man with a car, Takeru (Keita Machida), who offers to drive them home. What ensues is every obsessed fan’s dream, and every celebrity’s nightmare.

Takeru, meanwhile, goes on to the hospital where his girlfriend is in a coma, and reports that he’s done two more good deeds that day. The young woman took a bullet in crossfire as armed robbers were chased by the police. God then told Takeru that she will regain consciousness if he does good deeds, and so he does.

On the same evening, Tetsuo (Nobuyuki Suzuki) is released from prison and immediately goes after the yakuza gang who had him sent up. With impressive fighting skills, a lethal pickaxe and apparent immortality, he fells dozens of them, even when he’s pushing his dementia-stricken grandmother to the train station in a wheelchair to meet her (deceased) husband.

Responding to a question about how much Sho Aoyagi’s own life might have shaped his character in the film, Sabu said, “I created the character of Hiroshi before I had any discussions with Mr. Aoyagi. He usually wears a bit of stubble, which I think makes him look a lot like an enka singer. When we were walking on the red carpet at the Berlin International Film Festival for Mr. Long, he had on this tuxedo that really gave him an enka vibe. That’s how the character came to me. Also, Mr. Aoyagi is very popular with older women.” 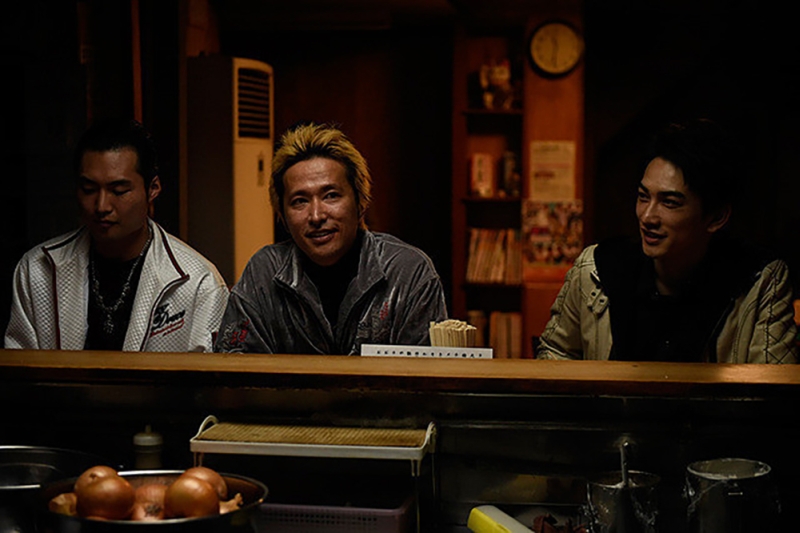 He expanded, “I decided to make him an enka singer because enka fans happen to be women of a certain age. There aren’t that many films out there with a lot of older women in them. Enka is like country music in the West, and although this is true of other musical genres as well, I find the phenomena of fandom to be quite interesting — this psychology of the fan who thinks s/he can listen to a song and believe it was written just for them.”

Sabu enjoyed creating the character so much that he even wrote the lyrics for Hiroshi’s songs, as well as working with composer Junichi Matsumoto on the music. One critic noted that she could just imagine Hiroshi appearing on the popular year-end NHK-TV singing contest "Kohaku Uta Gassen/Red and White," and asked whether Sabu planned to release a CD of the music.

Sounding like a true producer, Akiyama said, “That’s a very good idea. But I’ll have to consult with Mr. Aoyagi and our company.” Added Sabu, “I had hoped to debut the character of Hiroshi [as a new singer], but unfortunately that hasn’t happened yet.” (It’s never too late — just look at Spinal Tap!) 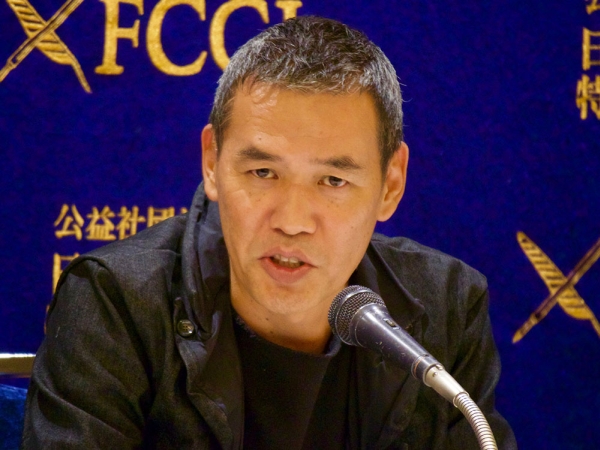 The director was asked whether Stephen King’s Misery, adapted into Rob Reiner’s superlative film, had influenced the Hiroshi-Masako storyline. Sabu concurred that he’d been reminded of the story while writing. “I had that kind of heavy character in mind at first” for the No. 1 fan, “a little heavier than she ended up being in the film,” he said. “I ultimately decided to not go in that direction, because I wanted to suggest that they could actually be a couple, that it’s not so strange to imagine. That’s why I offered the role to Ms. Tsutsui, because she’s an amazing, amazing actress. She did it so wonderfully, bringing so many different facets to the character. She can be so charming and yet so scary. If I’d gone with a character like in Misery, it would’ve been more of a horror film.”

The Japanese flier features a prominent image of a jar of jam, and a film critic asked Sabu just what the title refers to, since jam “can mean the stuff you spread on bread, or that you’re in a fix, and also musicians improvising on stage.” The director responded, “Yes, it means all those things. That ’s spot on.” He laughed and then said, “I’ll share the backstory with you. In 2017 I was with my family in Victoria, Canada and we just happened to visit a café called Jam. The food was really great, and my wife said, ‘You should call your film Jam.’ And so I did.”

The critic also asked about the classic car that Takeru drives in the film. “I couldn’t take my eyes off it,” he enthused. As it turns out, it wasn’t such a trivial question. Sabu explained, “I wanted the car to have a classic feel, and I wanted Takeru to have a backstory. The backstory could be that he’s actually quite affluent, so I imagined him choosing a vintage auto, a classy classic. The interiors are classier, too, with leather seats. Modern cars aren’t interesting — they’re round and boring.” And then the aha! moment: “Also, the car is important because we’re hoping to make a couple of sequels to the film.” 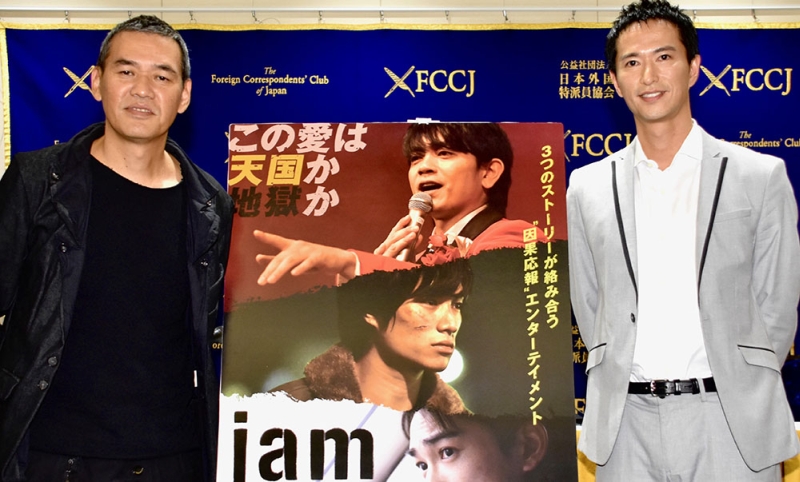 The director had done his post-production in Germany, and he was asked whether that was because he felt a foreign post-production crew might lend the film a different flavor. Noted Sabu, “I’ve had a longtime relationship with [Germany’s] Rapid Eye Movies. They funded three of my earlier works. I find that it’s much better to do post-production overseas, especially when it comes to color grading and sound mixing. The post- production crews overseas have such craftsmanship, and such ownership of their work, so the quality is much better.”

Akiyama was asked the same question, and his response was something the majority of Japanese directors will sadly never hear. Said the co- producer, “The director made this request to do post-production overseas, and we supported him because we felt it would help bring an international sensibility to the film. It’s our company policy to respect the freedom of the creator, and since we are also looking to expand overseas, it’s very beneficial to have that kind of foreign influence. So we were really thankful that we could complete the film in that way.”

Although the international premiere of Sabu’s Jam has not yet been announced, one can imagine it will be appearing soon on German screens. 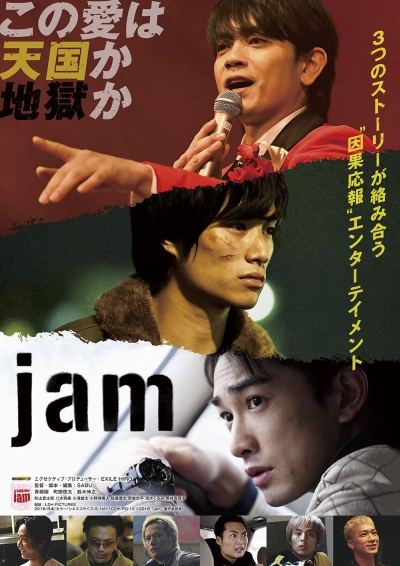 ‘jam’: Comedy with a touch of ‘Misery’