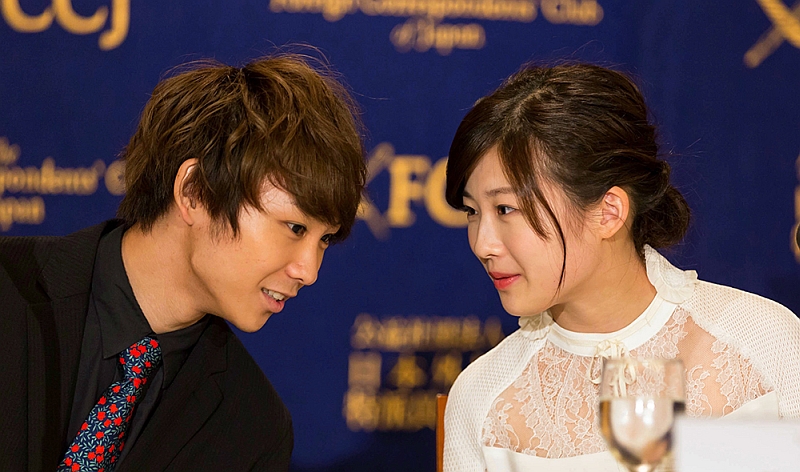 Kenta Suga gets guidance from his costar, Sairi Ito, before introducing himself in English, echoing, word for word, her earlier introduction: “Hello, everyone. Thank you so much for coming over today. I’m very happy to be here.”

Fans of Japanese television and commercial cinema will be familiar with Kenta Suga and Sairi Ito, two young performers who began their careers in early childhood and have been accruing credits at an impressive pace.

By the age of 13, Suga had received a Rookie of the Year Award at the Japan Academy Prizes for the hit Always: Sunset on Third Street, and would go on to star in the enduringly popular series Kamen Rider in his late teens. Ito made waves on several popular TV shows before making her film debut in Takashi Miike’s big-ticket Lesson of Evil, helping her land roles in two box office smashes earlier this year, The Last Cop: The Movie and One Week Friends.

But nothing will have prepared fans for their audacious performances in Love and Other Cults, playing their first dark, adult characters with remarkable energy and authenticity. Required to be both angelic and demonic, Suga and Ito demonstrate just how much emotional depth they can bring to their roles, allowing them not only to demonstrate their surprising range, but to effectively announce their coming of age in the industry.

Were they not just a little bit worried about trading in their “good-kid” reputations for something much more twisted?

Appearing at the Q&A session following FCCJ’s sneak preview, Ito enthused, “When I first read the script, I thought it was a very good, very interesting story. And it was really realistic. The role was something I thought I could pour myself into. So I said yes right away.”

Agreed Suga, “I thought the script was super interesting, too. When I saw [the director’s 2016 film] Lowlife Life, I thought I’d like to work with Mr. Uchida, so I immediately said yes. This was the type of role that I’d not done before, so I thought it would be a good opportunity to grow as an actor, to stretch and maybe discover a new side of myself.

“Meeting Mr. Uchida and Adam,” he admitted, “I was quite relieved to see they were more normal than I had envisioned [cue audience titters]. When I saw Lowlife Love, I was a little concerned about what kind of director Mr. Uchida would be. But he turned out to be a really charming man. I felt very safe going into the project.”

Ito added, “I had met Mr. Uchida and Adam before, and I didn’t have any qualms about working with them. And Adam, being the humorous, comedic character that he is, has helped me time and again.”

Although it also concerns the lives of the marginalized and the frequently felonious, and is peppered with scenes of sudden violence and look-away debauchery, Love and Other Cults takes a far more candy-colored, zippily-edited approach to its many characters and subplots. It also boasts grade-A production values, along with the world-class turns of its talented leads, and is sure to reach a far wider audience.

Surprisingly, a “wider audience” is not always the target of Japanese filmmakers, most of whom are sadly content with hometown distribution and wouldn’t dream of working with a foreign producer. Never mind that Torel is also the founding CEO of Third Window Films, the UK's leading purveyor of Asian contemporary cinema, and has distributed nearly 90 titles by today’s leading Japanese directors; nor that he’s also produced films by Sion Sono (The Land of Hope) and Yosuke Fujita (Fuku-chan of Fukufuku Flats).

Even Uchida calls his films “domestic;” but his past festival record — and current filmmaking activities in the US — suggest otherwise.

“In all honesty, I want to continue making domestic films like these,” he said, in response to a question about expanding his base. “But the more films I make in Japan, the poorer I become. There’s more money in the US. Being raised abroad myself [he spent his first 10 years in Brazil], it would be nice to be able to work in the US or Europe or China. That’s something I would like to do.”

Uchida’s characters, as Japan-specific as they may be, are plagued by the same needs and desires we all have: the restless search for identity, for a place to call home, for someone to love us just the way we are.

In Love and Other Cults, he focuses on deadbeat teens in a deadend town where “every day, someone breaks down… and someone is saved.” Suga plays Ryota, a delinquent who’s desperate to escape to Tokyo before it’s too late. Ito plays Ai (whose name means love), sent off at age 7 by her religious-nut mom to a cult at the base of Mt. Fuji, where she is worshipped as a goddess until the leader (TV talento Matthew Chozick) is arrested. Now a teen, Ai enrolls in Ryota’s school, and he falls for her instantly. 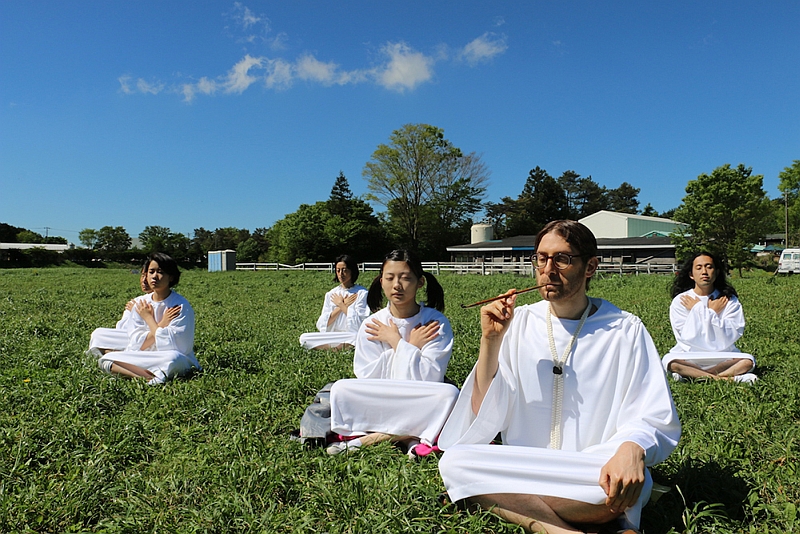 But thanks to the film’s frantically scrambled chronology, their stories diverge and we don’t learn until much later what happens to their initial rapport.

Jumping back and forth between the protagonists, we follow Ryota as he commits petty crimes with his wannabe-gangster pal Yuji (Kaito Yoshimura, en route to stardom) and the man-giant Kenta (Anthony, in a striking film debut), under the tutelage of local yakuza boss Kida (Denden). But as level-headed Ryota saves up for his getaway, Yuji grows increasingly unhinged and Kenta begins a sweet relationship with dive-photographer Reika (Hanae Kan). Soon, there must be blood — and it will arrive amid colorfully choreographed mayhem.

Meanwhile, Ai drops out of school and starts living with a loose-knit family of misfits and druggies, racing around town with a bosozoku bike gang, rocking a bleached-bonde ’do and an oversized purple tokkofuku (custom-appliquéd “special-attack uniform”), becoming the perfect yankii troublemaker. She’s then offered a new life with a “normal” family; but her chameleon-like need to fit in destroys her chances. Over the next several years, Ai dons and sheds multiple looks and personas, but eventually, her troubled journey takes her on dangerous detours… until college-student Ryota returns from Tokyo. 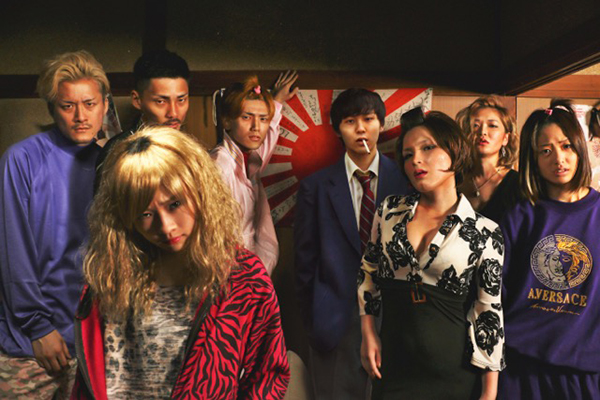 Wildly imaginative as it is, the film’s marketing materials trumpet that it’s “based on a true story.” Asked about this, Uchida said, “Yes, it’s based on a true story, about a girl who also appears [in a different role] in the film. Her story was far harsher than in my script, and more telling about the rural landscape, so I softened it up a little.”

He continued, “In fact, the script originally had two stories, one about a nikkei-Brazilian boy, and one about this girl. But we decided to merge them together. When I came to Kyushu from Brazil in junior high, about 80% of the classroom were delinquents. So I based the role of Ryota on one of my classmates, who ultimately joined the yakuza.”

It turns out the director wasn’t the only one who grew up surrounded by wannabe gangsters: both Ito and Suga also hail from Nowheres-ville towns, and completely identified with their characters’ plights.

“My hometown has a lot of the same essence as the one in the film,” said Ito. “That’s why I felt there was so much reality in the script. The delinquents in my school talked the same way, too, always asking each other, ‘Which high school do you go to? Do you know such- and-such a senior?’ It really resonated with me.”

“Yeah, there were people like that in my class, too,” laughed Suga. “I also came from a rough area, and there were these guys who would have this presence about them, but also this certain freedom about them. Ryota is kind of an amalgam of these types of characters I knew.”

What about the marketing claim that there are actual delinquents playing themselves onscreen?

Uchida explained, “We did have actual delinquents in the film: the bosozoku riders. Sometimes, we’d get calls from the police asking us to stop the shoot, since they were worried about them appearing on screen. So it might be fun for viewers to try to spot who are the actual delinquents and who are actors.”

Added Torel, “We were shooting in Yamanashi, and to use the bikes wasn’t that easy. So a lot of the people in the film were real bikers, including the two who appear in the main marketing images. They own the bikes, and they’re now becoming quite famous since the photos have appeared everywhere.”

Impressed by their standout performances, a journalist asked the young stars about their biggest acting challenges. Responded Suga, “Ryota is a poker-face character, so one of the most difficult things was figuring out where to draw the line, how emotional to be, how much of his interior journey I should depict.”

Commenting that Ai’s true emotions are also hidden, Ito added, “It was more difficult playing the scenes in which she’s enjoying herself, in contrast to the darker scenes. It was hard to express her purity, and it was hard to play this duality that she has.”

In both her angelic and her demonic personas, Ai essays an unforgettable body-swaying, hand-waving dance, something we understand to be akin to meditation and perhaps, forgiveness. An audience member suggested that Ai actually saves many of those she comes in contact with, even the male fans who follow her when she becomes an AV star. “Yes, I agree that she is a kind of savior,” said Uchida. “When I’ve shown my films in international festivals, I often get questions about the religious aspects, and whether I’m religious. [He’s not.] But I do think people need a belief structure. Being a kid in Brazil, which was a really Catholic society, there were a lot of pious believers there. I had real culture shock when I came to Japan, which doesn’t follow any religion. That may have had some influence on my depiction of Ai.” 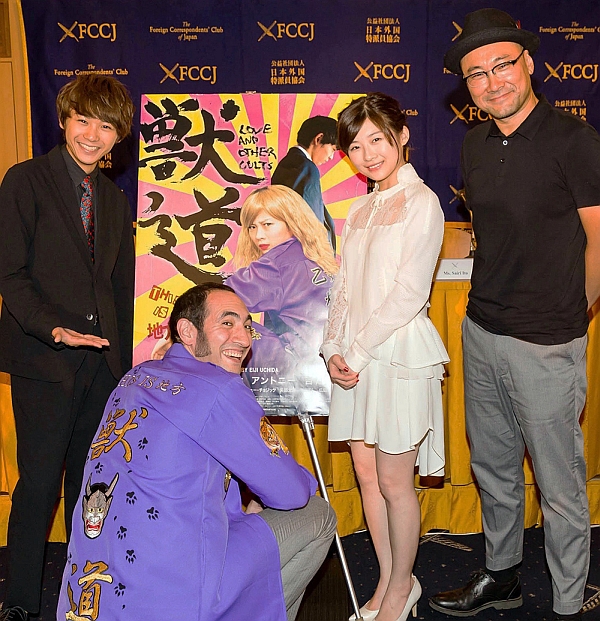 Love and Other Cults world premiered at the Far East Film Festival in Udine, and will make its North American premiere at the New York Asian Film Festival, before moving on to the Fantasia Film Festival in Montreal. If it follows a similar trajectory as Uchida and Torel’s last collaboration — and there’s no reason it shouldn’t — it will soon be seen in dozens of territories, and later this year, be released on DVD by Third Window Films. Watch for it. 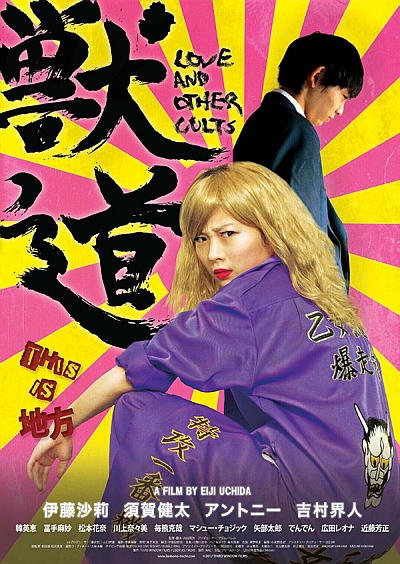