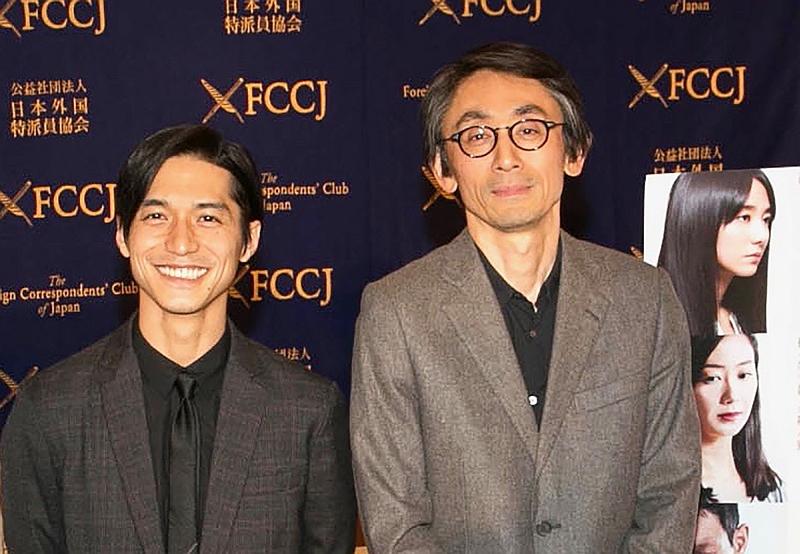 Who doesn't love being a witness to history - even if we don't realize it until after the fact?

The Film Committee found itself at the center of a historic turning point on January 31, when, following the jam-packed Q&A session for Daihachi Yoshida's new black dramedy The Scythian Lamb, Johnny & Associates officially announced that it was easing restrictions on the use of images on online media.

As everyone in Japan knows, Johnny's is the largest and most successful management agency for male entertainers, with "boy band" acts like SMAP, Arashi, Hey! Say! JUMP, KinKi Kids, NEWS, Kanjani8 and KAT-TUN, and award-winning actors like Takuya Kimura, Kazunari Ninomiya and Junichi Okada. The agency has long wielded enormous cultural clout, and tightly controlled the use of its talents' images, which appear only in newspapers and magazines.

Because Johnny's actors headline many of the films the FC screens, we had tried numerous times in the past decade to bring Johnny's talent to FCCJ, with no success. When the agency agreed to allow Ryo Nishikido, the star of The Scythian Lamb, to appear at the Q&A following our screening — with photo-taking by journalists allowed — we knew it was a minor triumph.

The icing on the cake was to learn that Johnny's had chosen FCCJ for its watershed moment. Not only had photos of Nishikido been allowed online for the first time — resulting in an ever-expanding flurry of postings — Johnny's then announced that images from all press conferences, interviews and stage greetings involving its stars would now be allowed on news sites online (although limited to 3 images for each site). 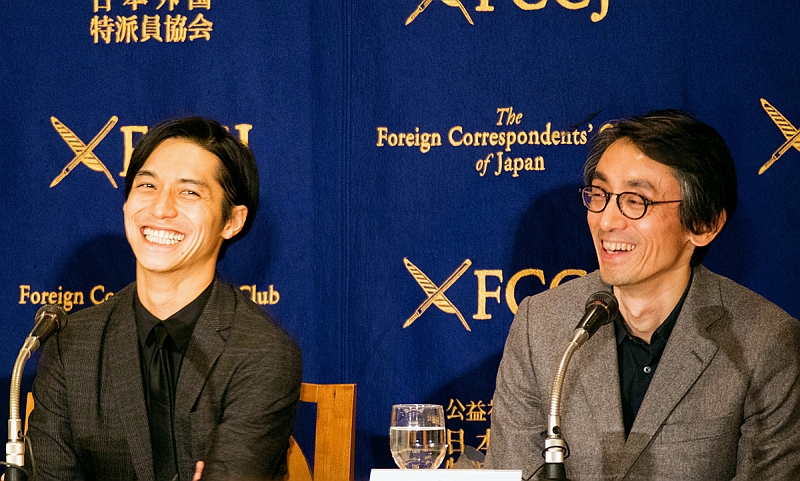 Ryo Nishikido handled his history-making appearance with exceptional poise, greeting the audience with a thoughtfully considered statement in fluent English. After thanking everyone for being there, he said: "This movie made me think about how I would act if someone I didn't know anything about joined my community. Then I realized that it's not just entertaining, but it also reflects social aspects. So I hope this film can give people a chance to think about issues such as depopulation and immigration."

Already a hit on the international festival circuit, and winner of the prestigious Kim Jiseok Award at the 2017 Busan International Film Festival, The Scythian Lamb is arguably Yoshida's most compassionate work yet. While his previous six films (including The Kirishima Thing, Pale Moon and A Beautiful Star) have also been darkly strange dramedies with social relevance, the messages here — not only about rural revitalization through immigration, but also tolerance, forgiveness, friendship and second chances — seem essential for today's Japan.

Ever spent a few hours in one of Japan's small towns and wondered just what it would take to liven it up a little? What if the government had a secret plan for repopulating such towns, and what if you were in charge of helping newcomers make themselves at home? 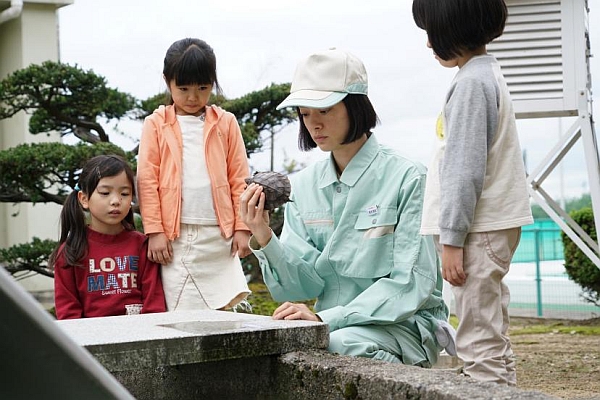 That's the position Hajime Tsukisue (Nishikido) finds himself in as The Scythian Lamb opens. Tsukisue is a city functionary in (fictional) Uobuka, a down-at-its-heels harbor town somewhere Out There, and he's been assigned to acclimate six strangers - four men, two women - as they arrive a few days apart via planes and trains, all a little dazed.

A model official, Tsukisue goes about the job with friendly efficiency, welcoming each arrival with helpful local factoids. "It's a nice place," he tells them. "Nice people, great seafood." A faded sign proclaims Uobuka: Full of Life, Cheer and Comfort. 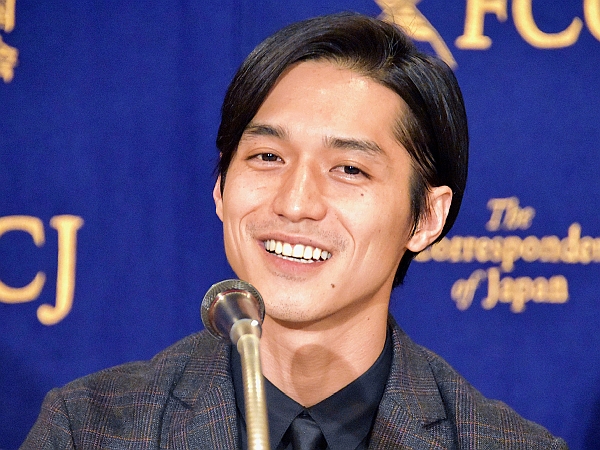 When he asks his first new charge where he's come from, the answer is so odd, he doesn't pose the question again. Tsukisue isn't the curious type, and besides, he's just discovered that his high-school crush, Aya (Fumino Kimura), is back from the big city. It's only later that he learns they're part of a program to release convicted felons who are considered low risk back into society. His boss warns him to breathe a word to no one, since the ex-cons must remain in town for 10 years in exchange for early parole. Feigning broad-mindedness and citing Japan's strict privacy laws as an excuse for the secrecy, he nevertheless warns, "Keep them apart, so they don't conspire."

Gradually, the newcomers settle in and assimilate into the community. There's Hiroki Fukumoto (Shingo Mizusawa), a timid type who starts apprenticing to a barber; Katsumi Ono (Min Tanaka), a silent type with a bad scar over his eye, who starts working in a dry cleaning shop; Reiko Ota (Yuka), a sexy type who becomes a caregiver in the senior day-care home that Tsukisue's dad frequents; Kiyomi Kurimoto (Mikako Ichikawa), who has a penchant for burying dead birds and fish, and whose methodical work as a janitor leaves something to be desired; Katushi Sugiyama (Kazuki Kitamura), a boisterous fisherman and photographer who is definitely up to something; and the youngest, Ichiro Miyakoshi (Ryuhei Matsuda), who happily becomes a deliveryman and begins taking guitar lessons from Aya after Tsukisue introduces him.

And then one day, a body washes up in Uobuka harbor, and foul play is suspected….

Nishikido has been honing his acting chops primarily on TV since 2003, but his past as a singer-dancer in idol bands Kanjani8 and NEWS informs many of his roles. Surprisingly, he is utterly convincing as Tsukisue, the boring-but-nice city functionary. There is underlying charm, but not for a moment does his character seem anything other than a small-town salaryman. His authenticity anchors the film in a believable reality, even as events begin spiraling out of control. 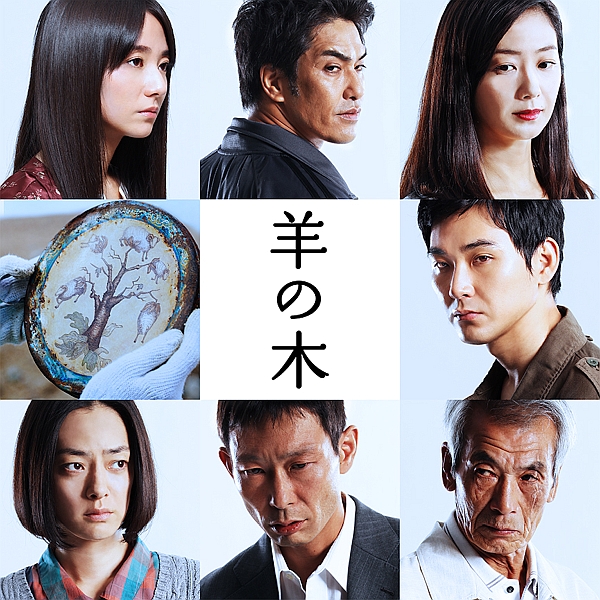 Asked how he tamped down his innate effervescence, Nishikido replied, "Acting in a film is solitary work, and I don't feel the need to bring my 'idol' presence into it. I think for everyone there are parts of your life that are more glamorous than others. There are moments where I'm just at home, watching TV, forgetting to eat. The glamour is just one part of my life. I didn't consciously suppress it, but I brought out my darker, flatter side."

"It was necessary for him to be a regular guy on screen," Yoshida concurred. "But not only that, he also had to have a presence that attracts you. Watching his previous work, I found him to be 'normal' but also attractive. You can't take your eyes off of him. He was just what I needed for this part."

Mentioning that Nishikido's character would probably be played by a young Tom Hanks if the film had been made in America, one FCCJ member asked the actor whether he had drawn from any foreign actors in approaching the character, and whether he had any designs on Hollywood. "I can't think of anyone I drew from in particular, but I learned a lot from the director, and I've learned a lot cumulatively from the 'role models' I've found while watching films. If I were to mention favorites, they would be Jake Gyllenhaal, Russell Crowe and Denzel Washington. I've watched their films over and over, so I may be unintentionally imitating them. As for career aspirations, if there was an opportunity for me in Hollywood, I would very much like to have it. But I was very nervous speaking in English tonight, so I need to work on that." 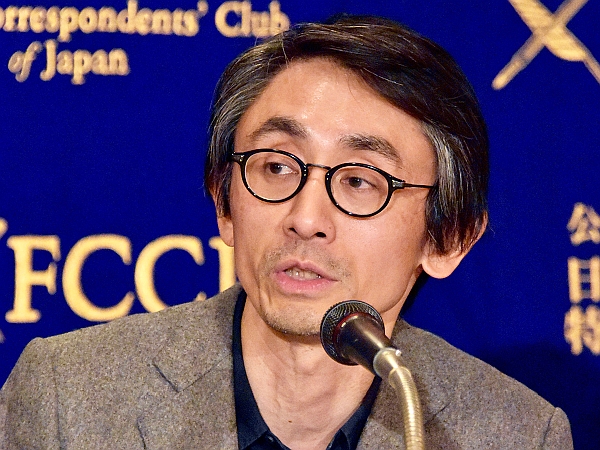 Yoshida has created his most compassionate film yet. ©FCCJ

Asked how he had juggled so many different genres ("comedy, yakuza gangster, even a tokusatsu monster film!"), characters and story strands, the director explained: "I tend to be really greedy in my filmmaking. I want to depict as many different emotions as possible, which makes my films very difficult to promote. But film should reflect the reality of our everyday lives, and the characters shouldn't be stereotyped or simplified. I think it's feasible to create such stories if you have enough time, and I always try to do so."

The next question concerned Yoshida's approach to keeping the film from being either lurid or conventional. "The film has a more subdued tone than the original work [the manga series Hitsuji no Ki, by Tatsuhiko Yamagami and Mikio Igarashi], which is more chaotic and sensational. But I wanted my characters to be more realistic, and to express their inner conflicts and the clashes between them in a more restrained way. So we decided to avoid creating in-your-face violence."

Striving to deliver on Yoshida's earlier invitation to ask "fresh, unexpected questions," one journalist inquired about the garage band in the film, a noisy trio composed of Tsukisue, Aya and their fellow high-school classmate on drums. "It's not in the original," said Yoshida. "But I had to think about how young people in rural areas spend their time. In my own case, I always played music with my friends. I thought it was a good way to bring these three together, since it was over a decade since they graduated from high school. Also, the emotion is coming from Aya, on guitar, and Tsukisue is supporting her on bass. That [relationship] is what I wanted to depict." 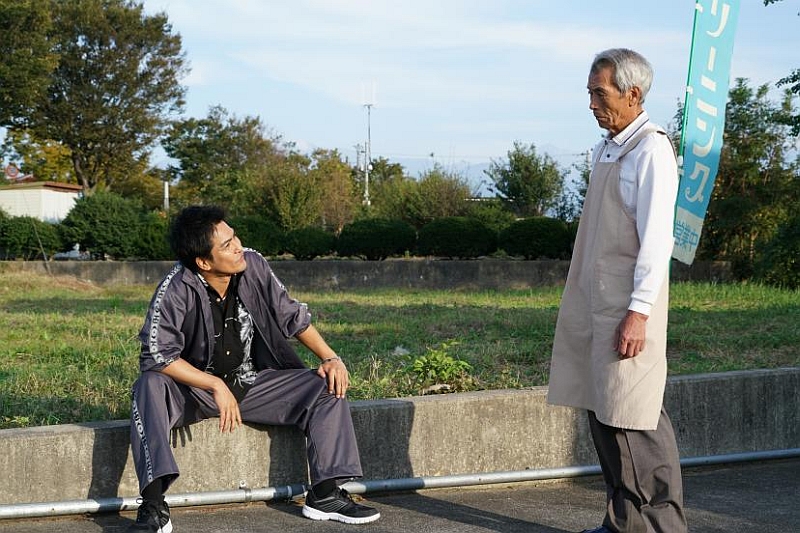 Nishikido added: "I usually play guitar, not bass, but the music was really edgy and I quite liked it. Also, I think the bass allows you to look at your band members while you're playing, and I watched Aya closely." He quickly clarified, "My character was watching Aya closely."

Surprisingly, no one asked about the film's title. While it opens with lines from an eponymous poem, it is only later, when one of the transplanted characters finds a plate bearing an image of the Vegetable Lamb of Tartary (below), that the meaning begins to dawn on us.

And yet, even then it's open to multiple interpretations — just like the best films should be. 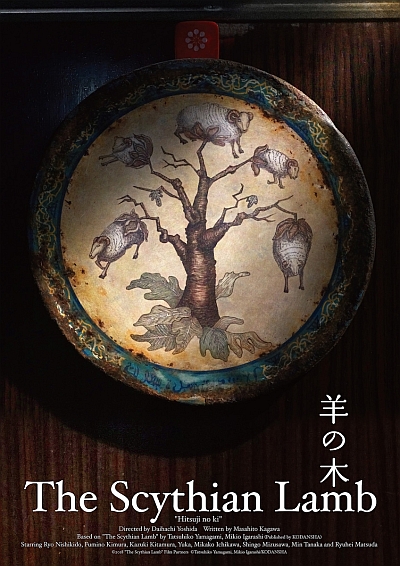