The Golden Age of Silent Cinema lasted longer in Japan than anywhere else, spanning roughly 45 years (1896-1939). While the transition to sound was all but complete in the West by 1930, and many Japanese films were full talkies by the mid- 1930s, the transition was delayed here. Why? Not because technology was lagging, but because of the popularity of katsudo benshi live narrators.

At the height of their immense popularity, around 1927, there were 6,818 benshi actively performing in Japan, including 180 women. These performers would not only write complete scripts for each film, they would enact all of the roles and narrate the action. Many of them were bigger stars than the actors on screen, with devoted fan followings and salaries that reportedly rivaled the prime minister’s (!). Books have been written about their influence on early filmmaking styles, and a handful of modern practitioners have regularly traveled the world to bring the art to today’s filmgoers. 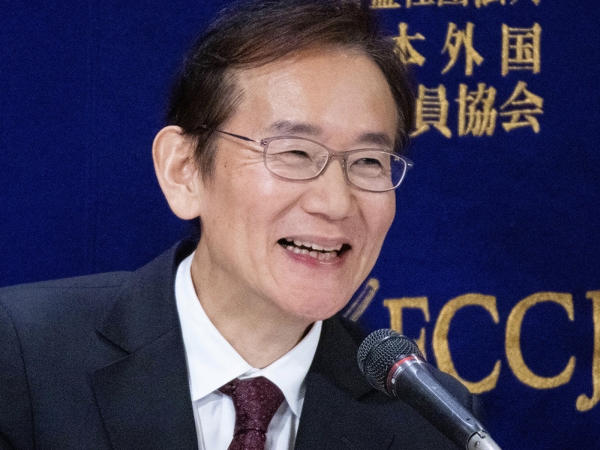 So it comes as a surprise that benshi have never been the subject of their own fiction film. Talking the Pictures now rectifies that, and it is likely to launch a mini-boom in live-narrated films. Directed by Masayuki Suo, creator of such indelible works as Sumo Do, Sumo Don’t (1992), Shall We Dance? (1996) and I Just Didn’t Do It (2007), the story takes place over a decade in the early Taisho era, when motion pictures were still accompanied by benshi and a small musical group, but talkies were beginning to encroach on their dominance.

Although the subject seems — and is — right up his alley, for the first time in his career, Suo did not originate the idea for his latest film. Speaking to the audience at the Q&A session following FCCJ’s sneak preview screening, the director gave full credit for that to Shojo Katashima, who’d been his assistant director on Lady Maiko (2014). “He brought his script to me, but he came to me for advice, not to ask me to direct,” he explained. “He just wanted my comments on the script. I found it especially interesting because it was about benshi and how they supported the silent film era for 30 years. Japanese have either forgotten about benshi or didn’t know they existed, so I liked that the script spotlighted the profession. I also liked that it was written in a way that suggested the silent film style, with [slapstick action] that would make the audience laugh.”

Ryo Narita studied with professional benshi for months to nail his performance in the film. ©Koichi Mori

Suo wasn’t the only one captivated by Katashima’s scenario. “Soon after I read it," he said, "my longtime producer, Shoji Masui, came to me with the exact same script and suggested that we should take on the project.”

From its opening frames, as children and weather disrupt the filming of a silent swashbuckler, to the hilarious bicycle chase in its final reel, Talking the Pictures enthusiastically proclaims its love for the movies. Endlessly inventive, populated with colorful characters and chockfull of clever period detail, it evokes the Taisho period through its production design as well as its (purposely) anachronistic storytelling, although it assiduously avoids becoming a melodrama like most of the films- within-the-film that its benshi stars narrate.

The story concerns young Shuntaro Someya (Ryo Narita), who has dreamed of being a benshi since childhood. Then he grows "as tall as a telephone pole" and falls in with a group of thieves who do their dirty work while he poses as a phony narrator, copycatting the styles of bygone benshi stars. By chance, Shuntaro escapes one day with a bundle of money and finds work at the small-town Aoki-kan, where audiences (and staff) have dwindled since the opening of a fancier rival theater nearby. It’s just the kind of place where he’ll be safe from the vicious head of the thieves (Takuma Otoo), who wants his cash back, and a police detective (Yutaka Takenouchi) who wants to punish the phony narrator for the “dishonor he’s brought to motion pictures.” 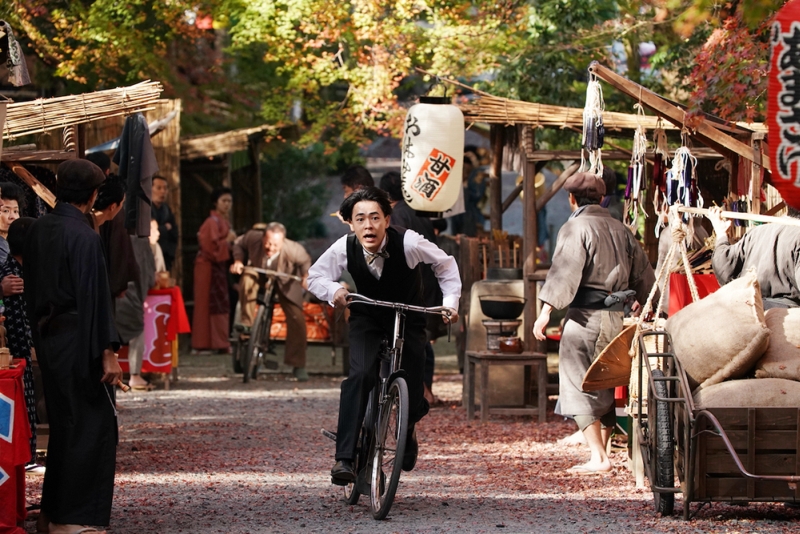 Shuntaro escapes from the bad guy. ©2019 TALKING THE PICTURES Production

But when he gets his big break on stage one night, his pursuers discover his whereabouts. And then there’s the girl, Shuntaro’s childhood crush, Umeko (Yuina Kuroshima). The aspiring actress is in the Aoki-kan that night, recognizes the flourishes of his performance, and rushes to his rescue. But when (real-life film director) Buntaro Futagawa hires her for a role that will take her away to Kyoto, Umeko has to choose between a career and Shuntaro.

Team Suo favorites Naoto Takenaka and Eri Watanabe are slide-splitting as the owners of the ailing Aoki-kan, which is populated with some of the most uniquely endearing characters seen on Japanese screens since Suo’s 1996 hit. Masatoshi Nagase is the theater’s drunken former katsuben star, self-styled as the Poet of the Dark; Kengo Kora is the oily new star, too big for his own silk breeches; Fumiyo Kohinata is the unscrupulous owner of the rival theater and Mao Inoue is his seductive secret weapon for putting Aoki-kan out of business. Also making appearances are Sosuke Ikematsu as Futagawa, director of the classic silent tragedy Orochi (which plays under the film’s final credits), and Koji Yamamoto as Shozo Makino, another real-life director who is considered the father of Japanese film. 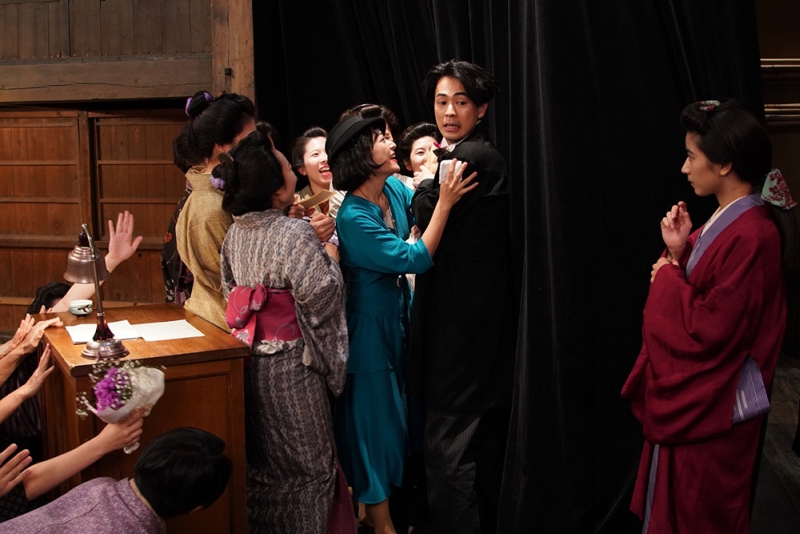 But it is really Ryo Narita — whose presence on Japanese screens large and small has practically exploded since his first appearance just 4 years ago — who anchors Talking the Pictures, and with an exuberant, affable star turn that is sure to propel him even faster into the pantheon.

How did Suo find him? “I wasn’t really familiar with too many actors in the younger generation,” the director confessed. “I met a lot of young actors and actresses during the casting process, but the reason I ultimately cast Mr. Narita wasn’t his acting talent or his voice. It was because I liked him. [During casting] I said to myself, ‘I really like this young man,’ and that ’s it.” (Cue appreciative laughter.)

He continued, “I think there are two reasons he’s so good in the film. First, as an actor, there’s a naturally good-humored, amiable side to him, and I knew that if I could bring that out in his performance, it would make Shuntaro a wonderful character. Secondly, he put everything into his training as a benshi. Exerting all that sweat and toil is a talent in itself, so I really [can’t take too much credit] for his amazing performance.” 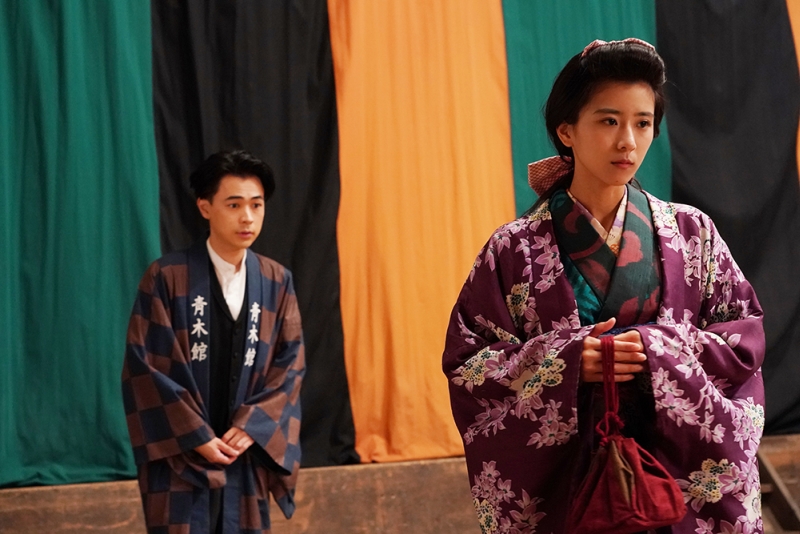 Shuntaro and his childhood love Umeko reunite for the first time in a decade. ©2019 TALKING THE PICTURES Production

Asked whether he had a natural aptitude for impressions, Narita told the FCCJ audience, “I think I probably do have a bit of natural talent. But it took me 7 months of training for 3 hours every day with a professional benshi to play this role. I didn’t even know there was such a profession, but when I saw what they did and how they did it, I realized it really fit my [natural physicality].

“The most amazing thing about benshi is that they actually take on three roles — that of scriptwriter, actor and narrator. The first time I performed, it felt really good. It really grew on me. After we wrapped, I had a yearning to continue, but I didn’t want to have to keep [training so hard].” 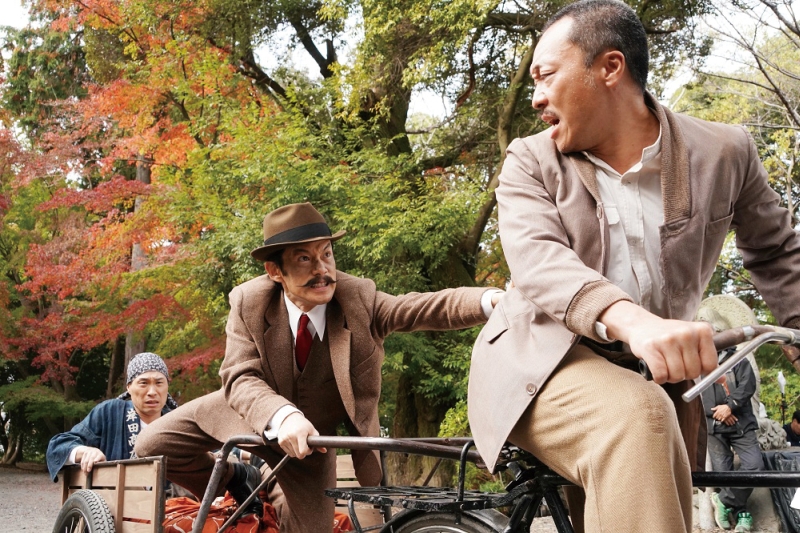 Cops and robbers on the move. ©2019 TALKING THE PICTURES Production

In a discussion about the younger generation’s reduced attention spans and the trend toward interactive experiences, Suo was asked what he thought about the audience being encouraged to interact vocally with his film, a la Rocky Horror Picture Show. While the director grappled with the question, which was then rephrased to include the suggestion that he create a director’s cut and have Narita narrate all the roles, the actor warmed to the approach. “I’d love to do that, although I’m not sure my voice would hold out for 2 hours,” he enthused. But Suo, citing his age, remain unenchanted: “I’d rather have someone else make a film like that.”

In a film driven by a terrifically jazzy soundtrack, the theme song, which plays jauntily over the end credits, invites continued humming long after one leaves the theater. To the surprise of the audience, who imagined it was written expressely for Talking the Pictures, a film critic asked how an 1865 tune written for the American Civil War came to be used for the film. Responded Suo, “The song was actually sung by a big star in Japan in the Taisho era, if not the early Showa era, and became a massive hit. The title was ‘Tokyo Bushi’ and the lyrics were changed to focus on Tokyo. I wanted to use a song that was symbolic of the Taisho era, so we changed the lyrics again to focus on benshi.” 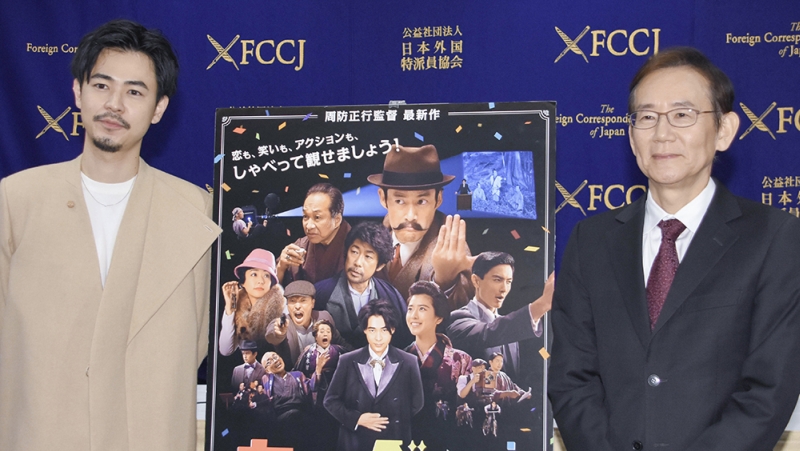 Narita and Suo with the film's poster. ©︎FCCJ

At the end of the session, the audience was treated to a short live performance by Narita, who had to push himself way back from the microphone, since he’d learned to project his voice like a true benshi. Tilting his chin as he hit the lower registers, he recited lines by one of the many, many characters he’d voiced in Talking the Pictures, demonstrating his skill at raising goosebumps even when no action is taking place on the screen behind him. 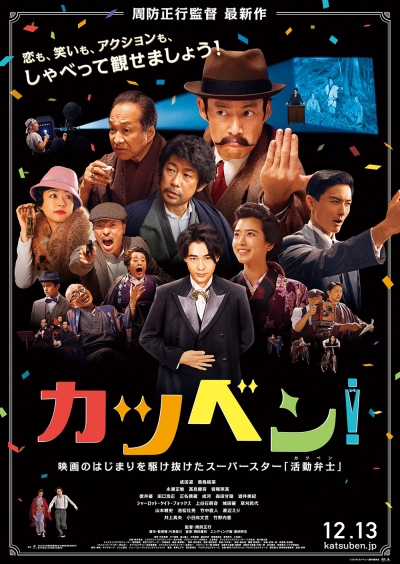