The Vancouver Asahi (Vancouver no Asahi) 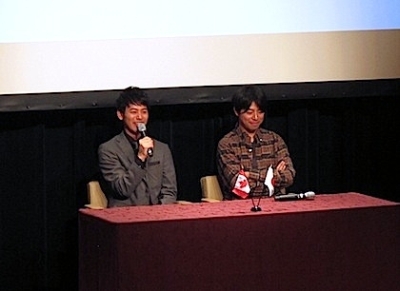 Tsumabuki and Ishii appeared before an FCCJ audience for the second time
in 6 months, following the May sneak peek of Our Family.

The Japanese headlines blared “I Can’t Speak English!” quoting megastar Satoshi Tsumabuki during the Q&A session that followed the FCCJ-Embassy of Canada’s sneak preview screening of The Vancouver Asahi. The headlines were unfortunate, since the comment was made as Tsumabuki was describing his reaction to a post-world premiere crush following the film’s September bow in Vancouver, when everyone imagined he was as fluent as the nisei character he plays in the film.

The Q&A session was far deeper than the Japanese news suggested, with Tsumabuki and director Yuya Ishii eager to discuss their feelings about the film’s approach to some sensitive issues. Based on the true story of the scrappy Japanese-Canadian nikkei baseball team that overcame poverty, discrimination and ostracism to become the five-time Pacific Northwest League champions just prior to World War II, the David vs. Goliath tale evokes a little-known era in Canadian history, when an underdog ball team brought Japanese and Canadian fans together in a jubilant celebration of sport and life. 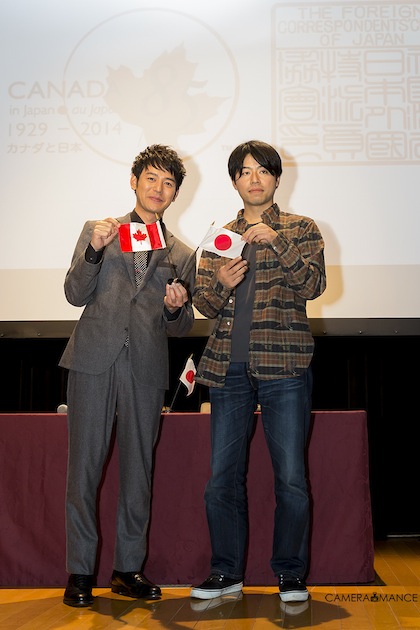 Tsumabuki and Ishii pose with flags at the Embassy of Canada,
site of the MC's first-ever outside sneak preview screening.  cMance Thompson

A big-budget spectacle from Toho that marks Fuji TV’s 55th anniversary, The Vancouver Asahi had its world premiere, appropriately, at the 2014 Vancouver International Film Festival, where it was hailed for its gorgeous cinematography and earned the prestigious People’s Choice Award. Ishii admitted that it had been “nerve-wracking” to debut in Vancouver, since he understood the perception problems that might result from a Japanese cast and crew depicting events in Canada, as well as shooting it entirely in Japan. (The enormous open set where 70% of the shoot took place was built in Ashikaga, Tochigi Prefecture.)

“Winning the award meant that the depiction was acceptable to the Canadian audience," said Ishii, "which felt good. I was really relieved.” Tsumabuki added that he was worried about how the scenes of racial prejudice would play, and said he was “almost in tears” when the audience began cheering after his character finally starts hitting bunts, rather than striking out. “I realized that the film became more than just entertainment, it was able to transcend borders and language barriers. I felt the two countries were bonded together, and I was really touched to be able to experience that.”

To a question concerning the film’s depiction of “soft” leadership and the suggestion that Ishii had purposely drawn parallels with Japan’s lack of leadership today, the director answered, “I did a lot of research prior to making the film, and I saw the Nisei as not showing a strong will or strong principles. They were having an identity crisis, but doing their best to avoid conflicts with each other. They felt trapped, with nowhere to go… So I think a parallel can be drawn with today, for anyone who is feeling the same way.” Tsumabuki declared himself completely aligned with the hesitance of his character ? “Like Reggie, I always prefer someone else to take the lead” ? but also suggested that leadership is a trait that can be expressed in different ways. “In the end,” he said, “it’s most important to be able to be yourself.”

Set in Vancouver’s Japantown, The Vancouver Asahi opens in the late 1930s when a group of Nisei friends finds refuge from their manual jobs, demanding Canadian bosses and dead-end lives by joining the local team, the Asahi. Tsumabuki plays their leader and shortstop, Reji "Reggie" Kasahara, a sawmill worker whose abusive father (Koichi Sato) leaves the family for extended periods to build railroads. Roi "Roy" Naganishi (Kazuya Kamenashi) is the team's ace pitcher, Kei Kitamoto (Ryo Katsuji) is the team's second baseman and Tom Miyake (Yusuke Kamiji) is the catcher. Only third baseman Frank Nojima (Sosuke Ikematsu) has attempted to move up in the world, getting a job at a local luxury hotel.

The Asahi are physically overshadowed by their bigger, stronger opponents and become known for spectacular defeats. But after constant drubbings, Reggie discovers the power of the bunt, and the team develops a winning strategy dubbed “brain ball.” Deploying superlative fielding, swift base-running and squeeze plays, the Asahi are able to overcome the powerhouse Canadians and gradually, to rank among the region’s most popular players. Then, just as Japantown’s hopes and dreams are reviving and cultural bridge-building has begun, Japan attacks Pearl Harbor and everything changes. In 1941, Japanese-Canadians are classified as enemy aliens and sent to internment camps in the B.C. Interior. The Vancouver Asahi never played again.

This year marks the centenary of the team, which won 10 city championship titles between 1919 and 1940, as well as the Pacific Northwest Championship five times. After years as a footnote to history, the Vancouver Asahi was inducted into the Canadian Baseball Hall of Fame in 2003.

In opening remarks before the screening, Laurie Peters, the Embassy of Canada’s Public Affairs Chief, pointed out that the Canadian government made a formal apology in 1988 and announced compensation payments to all the Japanese Canadians who had been interred during the war.
- Photos by Koichi Mori except where noted. 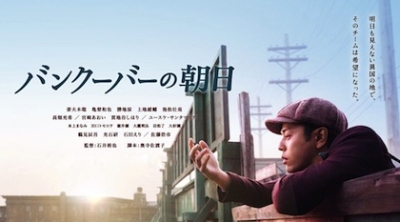