Like all fast-graying societies, Japan has not dodged the healthcare bullet. Current estimates put the number of dementia sufferers in the country at 4.6 million, but with 65-and-overs expected to account for over 30% of the population by 2025, that is sure to surge.

While the government has championed community-wide caregiving, the burden of funding and implementing much-needed initiatives has fallen on NGOs and NPOs at the local level. Yet even with neighborhood watch networks, innovative daycare centers and millions of trained volunteer caregivers, there are simply not enough people involved.

Taking his inspiration from a true story, writer-director-producer Kiyoshi Sasabe means his new film as a wake-up call — a poignant argument against the outsourcing of Alzheimer’s care. “Kindness is the best medicine,” says one of its protagonists, and Yaeko’s Hum amply demonstrates the resulting improvements in quality of life and dignity.

The film follows the broad outlines of the memoir of the same name by Nobutaka Minami, an educator who not only devoted himself selflessly to the care of his wife after she developed early-onset Alzheimer’s, but did so while concurrently undergoing a series of debilitating cancer operations himself. Sasabe first read the book 8 years ago, and was immediately interested in adapting it.

During the Q&A session following FCCJ’s sneak preview screening, one audience member praised Sasabe’s gifts as a “master tearjerker,” but asked why the film hadn’t been made by a major studio, given the seemingly made-for-mainstream-audiences approach to the subject. The director responded, “I wrote a script 8 years ago and initially planned to make it with a studio. But it’s about an elderly couple, about sickness and caregiving, and that does not sit well with younger audiences. So every major studio and TV station that I went to said no to the project.”

But traveling the Japanese festival circuit with other films, Sasabe was often asked why there were no more films for mature audiences, and gradually realized that Yaeko’s Hum could appeal to older fans.

Yoko Takahashi, an accomplished novelist, returns to the screen after a 28-year hiatus.  ©Mance Thompson

His commitment deepened further when the story took a personal turn. “I lost my mother two years ago, and before she passed away, she suffered dementia herself for 3 or 4 years,” he explained. “My younger sister took care of her, and it was a very challenging time. Whenever I talk with my contemporaries, the topic always seems to come around to ‘What do we do about our aging, ailing parents?’ I think this is a film that Japanese society needs. So I ultimately decided that I would raise the funds and make it independently.”

Sasabe had explored the theme before, in his Japan Academy-Prizewinning Half a Confession (2004) — although that work was equally concerned with the issue of euthanasia, when a husband is arrested for killing his Alzheimer’s-afflicted wife at her request. He had also, as an assistant director, worked on Solitude Point (1998), a story of the enduring love between a Japanese Alzheimer's sufferer and her Korean War-veteran husband.

With Yaeko’s Hum, Sasabe focuses on a relationship that would seem far too good to be true. Except that it really happened.

The film opens after Yaeko’s death, as Seigo Ishizaki (Takeshi Masu), a retired principal and school board director, addresses an avid crowd. "I cared for my wife for 12 years,” he tells them. “We’d been married for 38 years, so that amounts to the last third of our life together. I watched her gradually lose her memory… but then it struck me… my wife was just taking her time saying goodbye.” As Ishizaki speaks, his memories come alive in a series of flashbacks, beginning with the first signs of the disease in 1989.

As Yaeko’s illness progresses, it soon takes a tremendous toll on the family, yet Ishizaki remains impossibly patient as his wife reverts to childhood. Yaeko (Yoko Takahashi) was once a music teacher, and she retains her love of song; since she cannot remember the words now, she must hum them. When she hears her favorite songs by Shinji Tanimura, her smile always returns. But these are not easy years, and the film doesn’t gloss over the difficulties of home care — the diapers, the mood changes, the tantrums, the disappearance of romance from the couple’s relationship. Yet with the support of the couple’s two daughters, and eventually the entire town, Ishizaki tends to Yaeko’ s needs, protects her dignity and extends her life as he bids her a “long farewell.”

Looking far younger than she does onscreen (and younger than she deserves to), Yoko Takahashi thrilled several members of FCCJ’s audience who remembered her early career burning up the screen as the sexy star of such films as Koichi Saito’s Journey into Solitude, Kei Kumai’s Sandakan 8 and Shuji Terayama’s Farewell to the Ark. But Takahashi left the film world to write fulltime. With a successful, ongoing career as a novelist, what was it about this role that enticed her back to acting after a 28-year break? 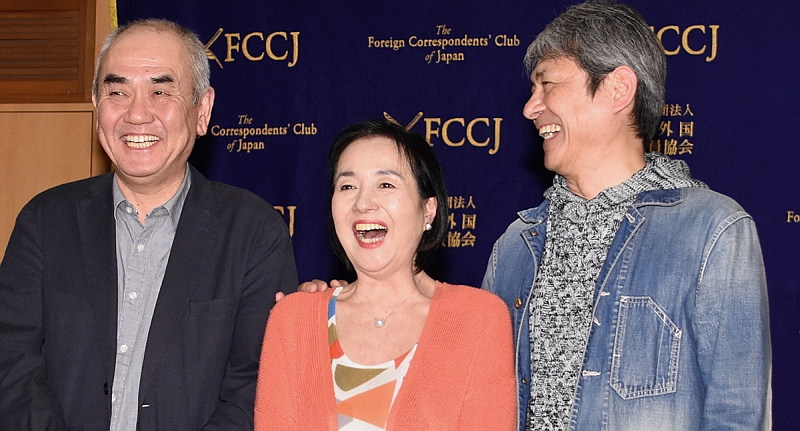 “It’s like getting back on a bicycle,” she told the audience. “Once you learn, you never forget how to ride. It didn’t seem like a long hiatus to me. But when the director asked me to play the role, I did have to think twice. I didn’t have a lot of lines, and I would have to play this person who’s ailing. So I hesitated. With the issue of dementia, you often hear about people becoming increasingly irritable, about them wandering and essentially becoming troublemakers. But Mr. Sasabe wanted me to make Yaeko charming [too], and that’s what really attracted me to the role.” A beat. “But it was a lot easier to play her when she’s aggressive.”

Takeshi Masu, a familiar face from literally dozens of supporting roles on stage, screen and TV for the past 35 years, marks a deeply moving debut in the lead here. Without his convincing portrayal, a fine balance of tender sentiment and gentle exasperation, the film would have collapsed under its own best intentions.

Asked how he prepared to become a saint, Masu admitted, “To tell you the truth, I couldn’t figure out how to approach the role because it was so starkly different from my past roles. But when I went on the set, Yoko-san was there as Yaeko, being really charming, and that helped me want to help her, to be as kind to her as possible.”

Takahashi mentioned that she had prepared for the role by meeting the author of the memoir, Yaeko’s widower, as well as by watching an NHK documentary on the couple.

Because there are flashbacks to the way back, as well as to the more recent past, Takahashi and Masu frequently found themselves tasked with playing their characters at different ages, even on the same shooting day. Masu spoke about the physical challenges of the role: “I played someone who starts at 40 and ages up to 80, so I would have to carefully gauge how slowly to walk or to speak for each scene, so that it would all seem seamless when edited together.” 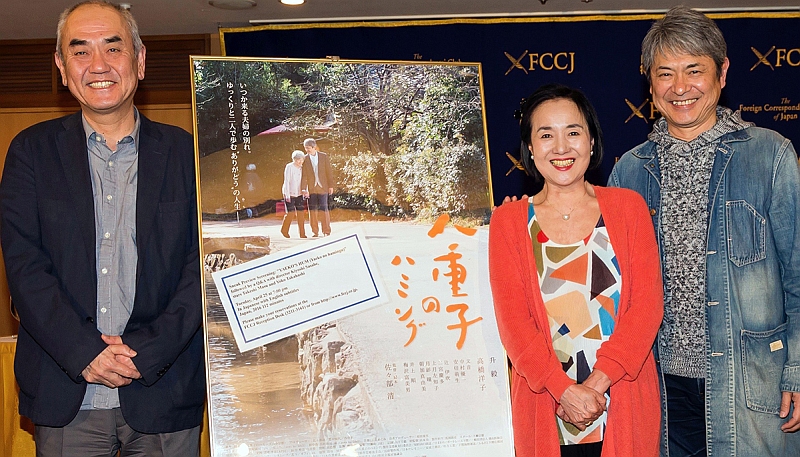 One foreign audience member mentioned her mother’s dementia and her own surprise at discovering, after moving her mother into a Japanese nursing home, that no one goes to visit their family members. Another viewer discussed how many people in Japan are now dying alone with no chance to be supported by the community, and asked the director whether he would consider making a “more realistic ” film about someone who doesn’t have a family or a support system.

“I didn’t want to depict the harsh reality of caregiving,” said Sasabe. “There are so many documentaries about that out there. I wanted to make a film about loving Yaeko, and how love prevails. I wanted it to be a pure love story about this elderly couple, represented by the line, ‘There are limits to anger, but kindness is limitless.’”

He continued, “I want you to see this film as a sort of fantasy. I wanted to depict [the husband] as a kind of superhero. It’s about dreams and about hope.”

Sasabe shot Yaeko’s Hum in the small castle town of Hagi, facing the Sea of Japan, where he has set four previous films. It afforded him not only gorgeous views, but also immense support from the city and its citizens. He hails from nearby Shimonoseki, and in an echo of his film’s message, having a local network has clearly been essential to him. 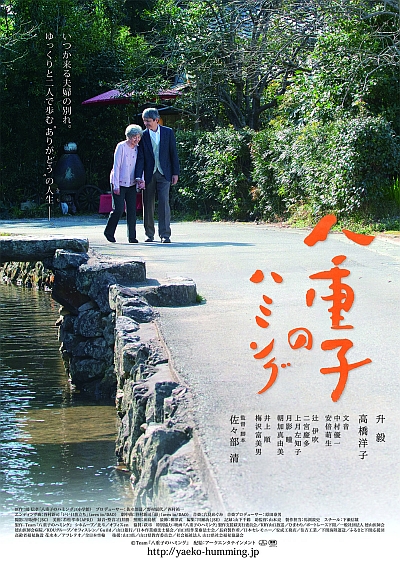