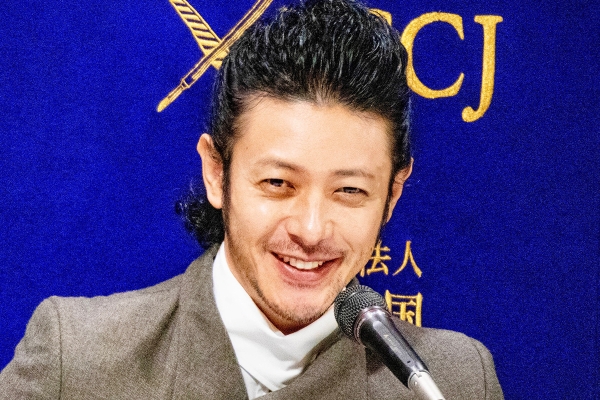 Film history is littered with forgotten titles by actors who always wanted to direct. Joe Odagiri’s visually and aurally stunning They Say Nothing Stays the Same is destined for a much kinder fate.

Appearing before a packed room at FCCJ the day after his return from the Venice Film Festival, which had hosted the world premiere, Odagiri told the crowd, “We received very warm applause, much more than I’d imagined, [which made me] very happy. But it made me feel a little uncomfortable, too, since this isn’t a film that should get such warm applause.” (He’s being humble.)

Reminded that he’d planned to study directing in California as a young man (where he wound up in acting classes after an admissions mistake), so it had taken him quite a while to get around to his feature-directing debut, he explained, “Working as an actor, I felt I would be taking advantage of my position if I directed a film. I didn’t think other directors would take kindly to it, and I thought audiences would look at the film through the filter of ‘presenting a film by the actor Joe Odagiri.’”

So what changed his mind, nearly 20 years after acting had made him a star? Odagiri turned unexpectedly confessional: “I don’t want to go into detail,” he began, “but I had a physical exam a while back, and the results weren’t very good. I may have overreacted, but I started thinking about what I should be doing in the time I might have left. I’d always wanted to make a film, but a strange kind of pride had prevented me. I felt that in my remaining time, I ought to do this." 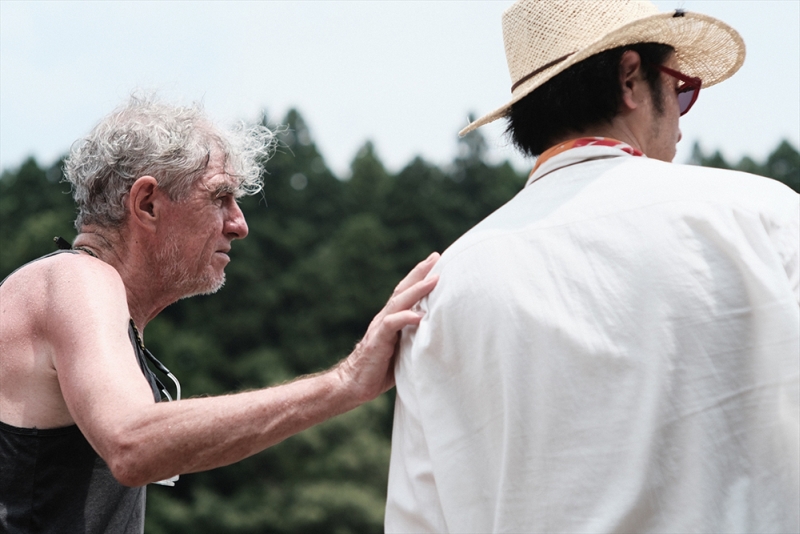 Odagiri on location with his masterful director of photography, Christopher Doyle.
©2019 “THEY SAY NOTHING STAYS THE SAME” Film Partners

“This” was also prompted by Odagiri’s encounter with legendary cinematographer Christopher Doyle (In the Mood for Love, The Limits of Control), who co-directed a film that Odagiri starred in, The White Girl (2017). Renowned for his prodigious artistry (as well as for his drinking), Doyle told the actor that if he made his own film, he’d like to shoot it.

“Chris Doyle’s role was incredibly important,” Odagiri concurred, when a film critic praised the film’s magnificent visuals. “I relied on him completely. He was able to realize everything that I imagined, and bring it all to the screen. He told me to concentrate on directing the actors and conceiving the composition of the shots, and leave the rest to him. Chris gave me 100% support throughout the filming, and 100% of my vision for the film was realized.”

The director with Masatoshi Nagase, who plays a key role in the film.
©2019 “THEY SAY NOTHING STAYS THE SAME” Film Partners

When the interpreter had finished translating his remarks, he added: “One more thing: Chris isn’t just an old drunk.”

Odagiri wrote and refined his script over several years; and if audiences expect something dynamically, radically contemporary, they will be surprised to discover They Say Nothing Stays the Same feels more like the measured, stately work of a classic auteur.

Set on a fog-covered river and a rocky shore somewhere in Japan’s past, it tells the story of a lonely old boatman, Toichi (Akira Emoto, in his first leading role in over a decade), who ferries villagers and visitors to a town on the other side of the river. His only real relationship is with Genzo (Nijiro Murakami), a young neighbor who seems friendly and helpful. Upstream, a large bridge is being constructed and Toichi will soon be able to retire. He has mixed feelings about that, but his past is such a mystery, we don’t know what prompted him to be there in the first place. He is wracked by self-doubts and haunted by nightmares, but he does not miss a day of work and does not complain.

The boatman's home on the river.
©2019 “THEY SAY NOTHING STAYS THE SAME” Film Partners

Then one day, he rescues a half-dead young girl from the water and gives her a place to stay. Fu (Ririka Kawashima, otherworldly in her major film debut) is as reticent as her host, but gradually, a friendship begins to grow. There are rumors about her own past — is she the kidnapped daughter of a murdered family several villages away or someone/something else? — but no one comes to claim her. As the days melt into months, nothing seems to change; but of course, nothing ever stays quite the same.

Set in early Meiji Japan but timeless in its concerns — the sacrifices made in the name of progress, the loss of cherished traditions and the natural environment, the human costs of capitalism — Odagiri’s debut is astonishing in its storytelling mastery and its stunning visuals, a tribute not only to his impressive skill at guiding actors to rich performances (especially Emoto, who is deeply moving, as is Masatoshi Nagase, who plays a hunter), but also to his ability at selecting the perfect collaborators. 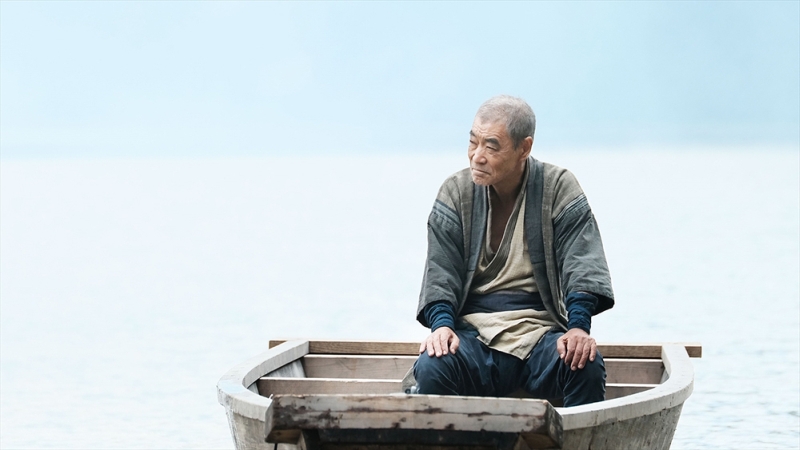 Emoto is deeply moving (and convincing) as the old boatman.
©2019 “THEY SAY NOTHING STAYS THE SAME” Film Partners

First among these, of course, is Doyle, whose camera captures a Japan that is at once achingly beautiful, steeped in lore but rushing headlong toward modernization. Shot in a splendidly scenic mountain valley in sunshine, rain and snow, with nearly constant mist rising from the boatman’s river, Doyle’s images are never less than captivating. Academy Award-winning costume designer Emi Wada (Ran, Samurai Marathon) and Armenian jazz musician Tigran Hamasyan, composing his first film score, also provide superlative support.

One of the other delights of They Say Nothing Stays the Same is the many cameo appearances, some as brief as a single line during a boat ride, by familiar faces: Tadanobu Asano, Yu Aoi, Isao Hashizume, Tsuyoshi Ihara, Jun Murakami, Takashi Sasano, Mitsuko Kusabue and Haruomi Hosono. When asked about his direction of Emoto, who is notoriously prickly, Odagiri responded, “Many veterans appeared in the film, and I decided that I wouldn’t give acting direction to any of them. What actors do is think about their roles, and how they can make them deeper and more resonant. I have a great deal of trust in the actors I asked to be in the film, and for me to tell them what they ought to do seemed superfluous. I understand actors, so it’s easier for me to direct than it is for [directors who haven’t acted].” 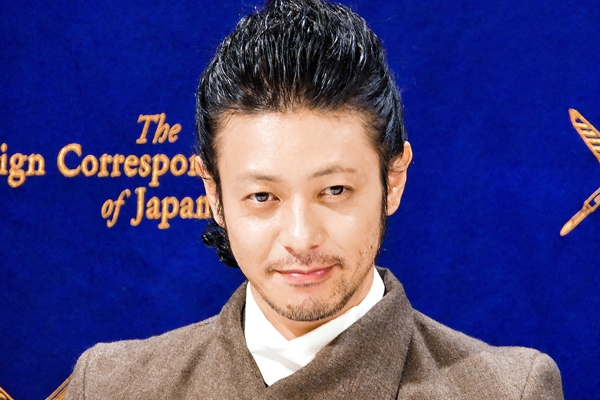 This begged a question about his own role in the film, which was behind the camera only. Asked whether he had considered acting in the film, and whether he’d consider doing so on his next directorial effort, Odagiri admitted, “Memorizing lines is such a hassle. To take time away from directing in order to memorize lines was something I didn’t want to do. I didn’t feel like I had the time to spare, and I think that will be the case in the future, as well.”

One FCCJ audience member, praising the film’s rhythm and pacing, asked Odagiri whether he had consciously chosen a cinematic style more akin with the past, or whether he’d had something else in mind. The director responded, “The film is set in Meiji Japan, about 150 years ago, and the rhythm of life was much different than it is today. It was a much more natural pace than today, when we live at such a hurried pace we tend to lose sight of things. As a result, people were in touch with themselves and the natural world. I’m hoping the audience will recognize that we’ve lost something in the name of convenience.” 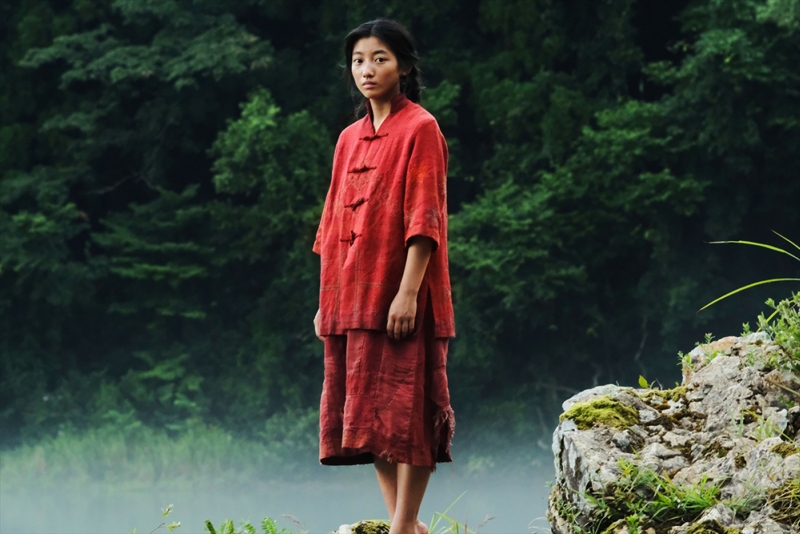 The mysterious Fu, played unforgettably by Ririka Kawashima.
©2019 “THEY SAY NOTHING STAYS THE SAME” Film Partners

Another audience member praised the film’s music and sound design. Odagiri explained that he’d been a musician and composer since an early age. “As a director, I’m probably focused on sound and music more than most directors. I was particular about creating the sound design for 5.1 surround sound, and using sound effectively with that system. To really appreciate this film, you have to see it in a theater with surround sound. I guess it will be available online, but since most homes don’t have 5.1 systems, don’t waste your time watching it online.”

Odagiri laughs at a question about why he doesn't appear in the film himself. ©︎FCCJ

Queried, rather inexplicably, about his definition of happiness, Odagiri made the question matter without missing a beat: “The theme of the film is individual happiness. One of the messages I incorporated is, despite the period of the story or what environment you’ve been placed in, if you’re able to live a life you believe in, then that’s a form of happiness.”

Perfectly timed for the dawning of the Reiwa Era, in which you’d be hard-pressed to find anyone who doesn’t long for a less frantic pace of life, Joe Odagiri’s elegant, elegiac They Say Nothing Stays the Same is a welcome — and welcoming — respite from the s***storm outside. Do not miss it.

(Overseas audiences will also have the chance to experience its embrace, as festival dates are sure to be plentiful.) 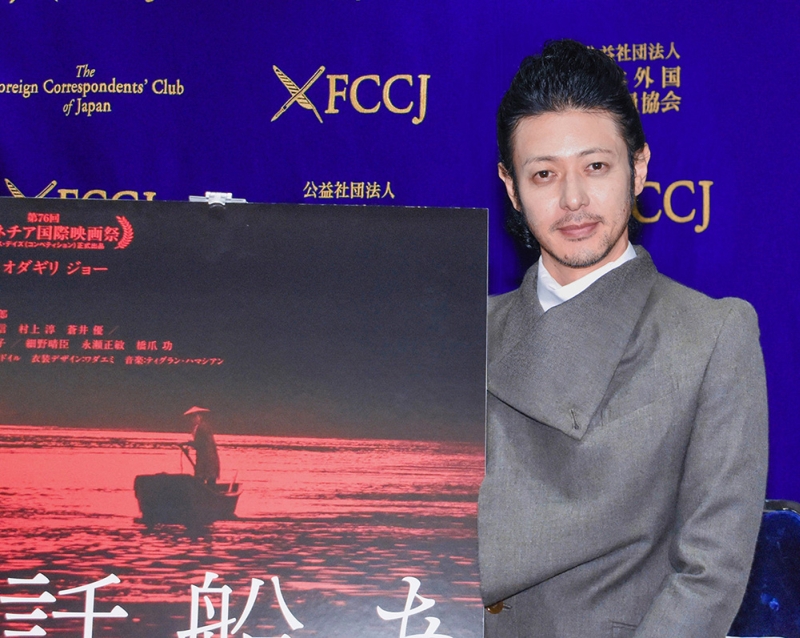 The writer-director with the poster for his film.  ©︎FCCJ

©2019 “THEY SAY NOTHING STAYS THE SAME” Film Partners