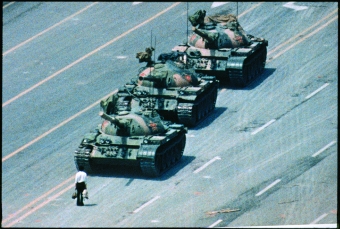 American photographer Charlie Cole won the World Press Photo of the Year in 1989 for his instantly recognizable "Tank Man" photo that depicted a lone protester staring down four tanks in Tiananmen Square, Beijing. He passed away at his home in Bali in early September after apparently suffering complications from a motorcycle injury he sustained in Japan in the late 1990s. The Texas native was 64 and is survived by his wife Rosa.

Cole arrived in Japan in 1980, and over the next two decades, he shot many telling moments in and around Asia for publications including Newsweek, Time, The New York Times and The Wall Street Journal. When Newsweek sent him to China in late June 1989, to cover the student protests, little did he know that his presence on that hotel balcony overlooking Tiananmen Square would incur the wrath of Chinese authorities who spotted him aiming his 300mm lens. Within minutes, police had forced their way into his room
to retrieve the film, but Cole, suspecting a possible visit, cleverly hid the precious roll of celluloid evidence inside the lid of his toilet, frustrating the authorities no end. Managing to avoid police surveillance, Cole brought the precious image to the Associated Press office in Beijing and had it immediately transmitted to Newsweek in the U.S. "I think his action (the white-shirted man) captured people's hearts everywhere, and when the moment came, his character defined the moment rather than the moment defining him," Cole told a BBC interviewer in 2005.

Charlie, your skill, selflessness and bravery to bring the truth about this history-defining moment, as illustrated so poetically through that one image, ensures that the world will not forget. We will not forget you.

Charlie Cole was born in Texas in 1955. He won the World Press Photo in 1989 for his history-defining "Tank Man" photo. Cole died in Bali at his home in early September aged 64.