Skip to main content
About
From the President - August 2020 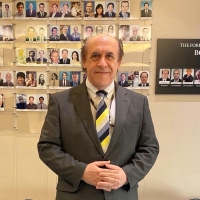 The life of my 2019-2020 Board has been inadvertently extended by nearly two months, thanks to the complicated election system imposed on us by the Shadan Hojin Law. A certain voting percentage is now essential for any candidate to be elected. When members fail to vote in sufficient numbers, the Club and our staff consume much-needed resources on establishing the new Board of Directors.

I have been serving on the Board for more than four years. In every one of those years, we had to meet the challenge of an insufficient quorum when we held GMMs and elections.

My own and past Boards have racked our brains for ways out of this situation. How can we encourage members to vote for officials of their own Club? One suggestion was that those members who fail to vote in any one year should lose their right to vote in the following year. On one occasion we were unable to reach the required quorum to approve the annual budget. We eventually succeeded, but our electoral negligence brought us very close to shutting down all Club operations.

This year, as we await the result of the third round of elections to the Board, we have been obliged to set up a Caretaker Board comprising both new and outgoing Board members until we can elect our full 2020 Board. Once all new Members of the Board of Directors are elected (we’re still one Director short), my Board’s term will formally end.

The electoral issue must, I believe, become a priority for the new 2020-2021 Board. We must find an effective way to encourage members to participate in Club elections. Therefore my final request as FCCJ President is: please help your club use its resources wisely by exercising the privilege of your vote.

All of this comes at a historic point for our host country. August 15th marks the 75th anniversary of the “Jewel Voice Broadcast”, in which the Showa Emperor broadcast Japan’s acceptance of the Potsdam Agreement, effectively ending World War Two and the Pacific War. Many of our correspondents have been hard at work covering events related both to the August 15th statement and to the formal signing of the Terms of Surrender on September 2, as illustrated so graphically on the cover of this issue of No.1 Shimbun.

Today, the news in Japan refers to the anniversary of the end of the war in a tone of relative calm. When I first arrived here about thirty years ago, I was astonished by the intensity and extent of the coverage of events related to WWII in this region. No missiles were brought out of their silos in East and Southeast Asia, but the media war was waged with extraordinary ferocity, and some of these media battles have yet to die down.

Intense debate continues over issues such as the so-called “Comfort women”, territorial disputes, the interpretation of history, and the meaning and value of official apologies.

The names given to wars and to “incidents”, even whether the usage should be the “End of WW2”, as often used in Japan, or “Japan’s surrender”, just as often used elsewhere, remain hot-button issues. And of course, Yasukuni, where a visit by a sitting Japanese Prime Minister on the 15th of August is still a hugely controversial issue. Sometimes it seems that these issues have been in the headlines forever.

After a few years as a correspondent here, my sense of surprise turned into no surprise at all. I became one of the herd of reporters obliged to cancel all personal commitments in the first three weeks in August in order to focus on the anniversaries of Hiroshima and Nagasaki, and on the War Memorial Service held in the Budokan ceremony rendered so majestic by the attendance of the Japanese Emperor.

Going back to the dawn of the FCCJ, this Club was established by correspondents who had been embedded with the Allied forces and then became a force of their own during the Occupation. Right from the start in October 1945, these men and women made our Club an essential forum for freedom of speech and expression in Japan. As will be seen in our October issue, the 75th Anniversary of the founding of our Club marks a historic milestone.

I have been granted the pleasure and been privileged by the honour of serving either as a Member of the Board of Directors or, more recently, as FCCJ President for twenty-one of the twenty-two years of my membership of our Club.

Along with all fellow members, the current Caretaker Board and, I am sure, every member of the imminent 2020 Board, I thank the membership, the staff and the news makers who have joined, attended, and worked so hard to maintain the FCCJ as one of the world’s great press clubs. Like all of us, I look forward cheerfully to celebrating our Centenary twenty-five years from now.