Blame it on the braids, the ready grin, the boyish mien. One could be forgiven for imagining that filmmaker Makoto Nagahisa identifies overly much with the protagonists of We Are Little Zombies, who are all of 13 years old.

There’s also the energized exuberance of his award-winning debut feature, which is exhilarating and mind- bending in equal measure, and seems to explode from the consciousness of a young person not yet bogged down with the wearisome woes of adulthood.

Belying his appearance and his demonstrated brilliance with visceral imagery, however, Nagahisa is in fact a thoroughly mature professional.

Appearing at the Q&A following our screening of We Are Little Zombies, he responded to questions in a measured, thoughtful manner, underscoring the level of care and compassion that are crucial underpinnings to the film’s success, along with its stylistic inventiveness.

Although one critic called the writer-director a “mad scientist” (a compliment), We Are Little Zombies is in reality the work of a serious-minded (and seriously imaginative) auteur, a longtime Dentsu ad planner who in 2017 became the first Japanese to win the Sundance Short Film Grand Jury Prize, for And So We Put Goldfish in the Pool.

Producer Shinichi Takahashi told the FCCJ audience that his company, venerable Nikkatsu Corp., had immediately recognized Nagahisa’s talent and begun talking with him shortly after Sundance about plans for his first feature. “He promised to come up with ideas for five or six stories during his paternity leave, so we could choose one to produce,” he recalled. “But when his leave ended, he came to us with a full script.

“During development, he’d wondered if it might be difficult to do a story about 13-year-olds, since it might not do so well at the box office. But when he came to us with the script, I realized that was really the story he wanted to tell.”

We Are Little Zombies is a tragicomic exploration into parental neglect, loss, grief, alienation, media manipulation, personal growth and other capital-T themes. It is also the most manically inventive, colorfully chaotic, whacked-out, surrealistic, joyously vibrant film you will see this year, if not this decade. 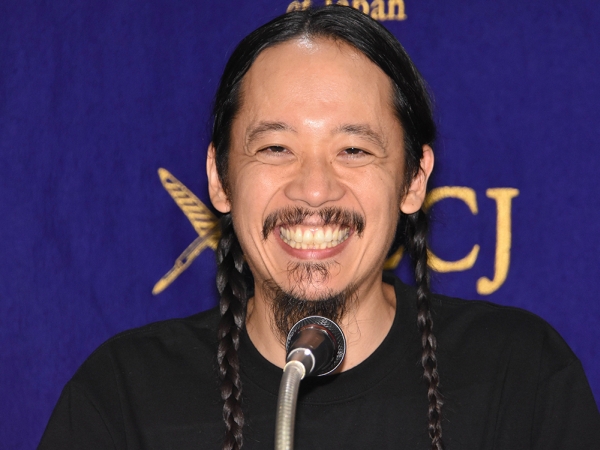 Taking his cue from his juvenile protagonists, Nagahisa has adopted the style of a Super Nintendo RPG game, with characters each having to overcome various challenges before moving on to the next stage of their lives.

If the resulting candy-colored, eye-popping pastiche of madcap mayhem seems devoid of emotional depth for most of its running time, it is precisely because the director is echoing the children’s own emotional voids. But as it nears the finish line, Zombies sparks to poignant life, presenting its characters, as well as audiences, with an unexpected — but well-earned — catharsis.

The film’s four protagonists meet for the first time at a crematorium. Hikari (Keita Ninomiya, who played the architect’s son in Like Father, Like Son), Ikuko (Sena Nakajima), Ishi (Satoshi Mizuno) and Takemura (Mondo Okumura) have all lost their parents at the same time. As they swap stories, they discover something else in common: they feel nothing at all for their parents, nor for most adults, except disdain. “Reality is too stupid to cry over,” says Hikari. Unable to grieve, unwilling to follow society’s absurd prescripts, they begin skipping school and hanging out together. Like so many of today’s plugged-in tweens, they have no dreams, no energy to move forward, no future.

Then one day, they find inspiration in a “garbage band” at a homeless encampment, where the members channel their misfortunes into music. The kids decide to form their own retro-chiptune band to try to retrieve their emotions, and dub themselves the Little Zombies. After creating costumes and instruments with stuff on hand, they find an online influencer (a hilarious Sosuke Ikematsu), have him shoot a music video and upload it. Overnight, they become viral sensations, and their mistrust of adults is amply rewarded (there are satirical cameos by Kuranosuke Sasaki, Youki Kudoh, Jun Murakami, Shiro Sano, Rinko Kikuchi and Masatoshi Nagase).

Nagahisa told the audience he was first inspired to write the film by a mysterious story out of Russia in 2016 dubbed the “Blue Whale Challenge,” an SNS phenomenon that reportedly targeted young gamers with a series of innocuous tasks that eventually led to a final challenge requiring players to commit suicide.

“This was making headlines around the world, and I was really shocked to hear it,” Nagahisa recalled. He’d been an avid gamer himself as a youth, especially when he was “in the throes of despair, since it made life a little easier. I could lose myself in games, and detach myself from reality. It was a filter for going through hardship.”

He apologized that the film “doesn’t have any real zombies.” But responding to a question about the metaphorical meaning of the title, he explained, “It’s a representation of the ways in which we’re incapable of communicating anymore, and it reflects the real world in the divide between adults and children.”

Praised for the film’s music, which Nagahisa himself composed (with the exception of the 1967 Zombies tune “This Will Be Our Year”) the director admitted, “Originally, I wanted to be a musician. I find that playing an instrument really helps give shape to certain internalized emotions and brings them to life. The music in the film is as important as the dialogue. Music is an artform that is more powerful than visuals. It instantly and directly reaches [the viewers'] heart. This was really my attempt to create a 120-minute opera.”

One audience member asked about the film’s references to writers Albert Camus and Franz Kafka. Said Nagahisa, “I studied French literature in college and was really into surrealism. I find a certain beauty in the juxtaposition of A and Z, rather than A and B. I think that absurdity should be accepted, and when it comes to dealing with the absurdities of life, surrealism is a tool and an approach that allows me to overcome them. 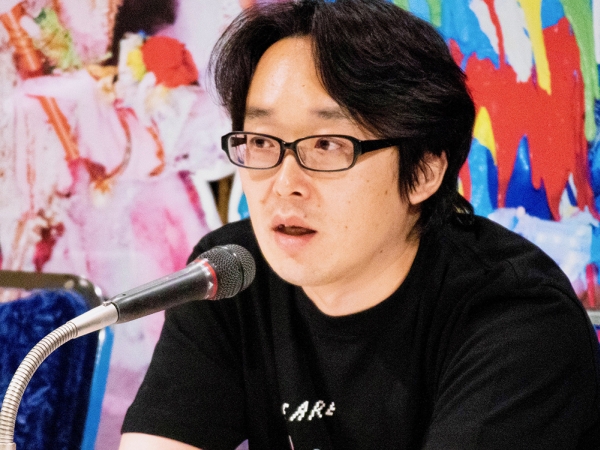 “That’s why I’ve layered the images in the film the way I have. The story is about how the protagonists deal with the absurdities of their lives and with events that have no rational explanation, and it’s only natural that I would draw from Camus’ and Kafka’s works.”

As for those layers, the director was asked just how many cuts the film has. “There are 1,800 cuts, or about 180 scenes in 2 hours, so I apologize if I wore you out.” 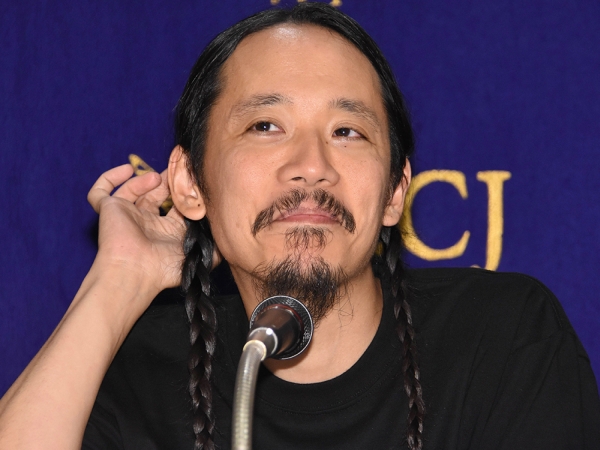 (Want to play Spot the References? Told that Zombies has a Juzo Itami (The Funeral, Tampopo) vibe, Nagahisa expressed enthusiasm for the work of Nagisa Oshima, Takeshi Kitano, Luis Buñuel, Michael Haneke and Richard Linklater, films like Kazuhiko Hasegawa’s The Youth Killer and La Jetée, and “films from the 70s and 80s, especially ATG films.”)

Another audience member, suggesting that the Zombies’ concerns seem specifically Japanese, asked about the film’s international reception (a foreign festival favorite, it won the 2019 Sundance World Cinema Special Jury Award for Originality, as well as a Special Mention in the Generation section of the 2019 Berlin International Film Festival).

“I want to avoid generalizations about how audiences react overseas vs. Japan,” Nagahisa began, “but it seems that more Japanese understand this emotionless state of the kids and can empathize with it, having been accused themselves of being the same way when they were young. With international audiences, [discussions] have focused on the character arcs of the kids as they learn to feel emotions again. Also, there have been comments about how cool [the Little Zombies band] is, that it’s a survival strategy. Instead of succumbing to the depths of despair, they developed a tactic to forge their own path.”

Takahashi and Nagahisa strike a pose familiar to all Japanese film fans. ©FCCJ

His producer nodded. “When he won the Short Film Grand Jury Prize at Sundance,” Takahashi recalled, “the reaction from Americans had been ‘This is our story, too.’ So we knew that Mr. Nagahisa’s themes have a certain universality, and the way he depicts the distance between children and adults also feels universal. [On this film] it was important to us to be protective of his visual sensitivity and to encourage his creative vision throughout the process. After the latest Sundance award, he’s received a lot of interest from studios and big- name producers, and [he’s considering several projects].”

Nagahisa hastened to add, “I didn’t make this film to win awards or praise. I made it because I truly, truly believed in it. And I made it as if my life depended on it.” 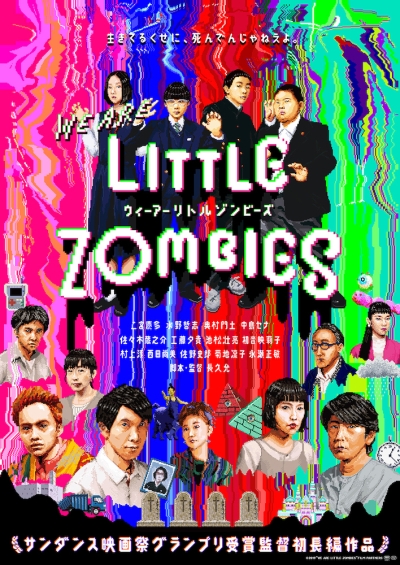 ©2019“WE ARE LITTLE ZOMBIES”FILM PARTNERS