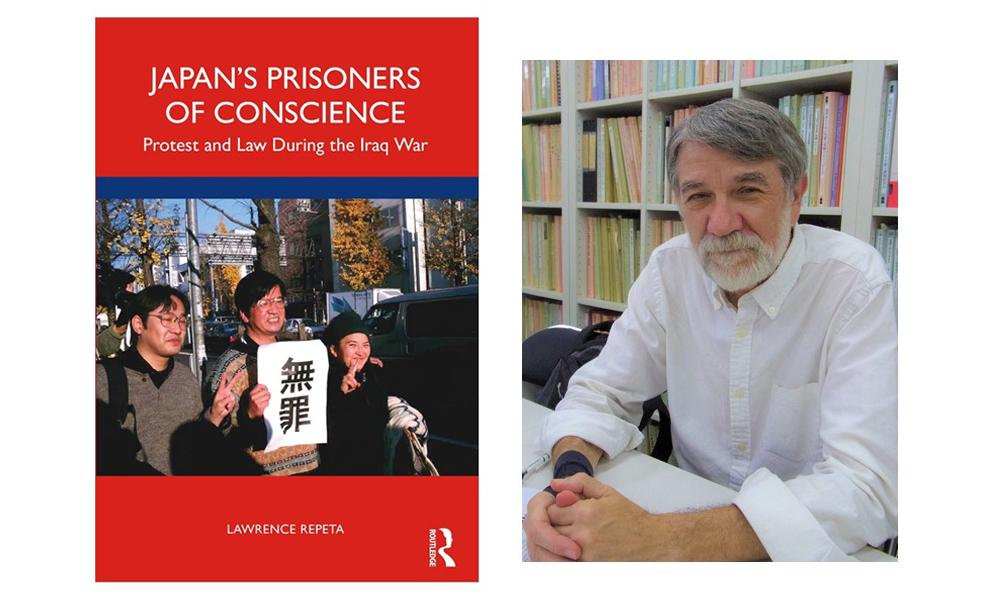 When Lawrence Repeta first took a spectator’s seat in Tokyo District Court in 1982, he was shocked to learn that the court prohibited spectators from taking notes during public hearings. His lawsuit resulted in a 1989 Supreme Court judgment that overturned a longstanding prohibition on spectator notes during court proceedings. Repeta is best known in Japan for this suit, which made constitutional history.  He has spent much of his life studying Japan’s Constitution and legal system.

His new book takes readers inside the criminal justice system, focusing on a case that raised fundamental questions about government authority to go to war, freedom of political speech, and treatment of criminal suspects. The Bush Administration demanded Japanese “boots on the ground” to support its 2003 invasion of Iraq. Eager to loosen the shackles of Constitution Article 9, Prime Minister Jun’ichiro Koizumi responded by deploying a small contingent of the Self-Defense Forces. But this move was highly unpopular in Japan. Would the deployment incite mass demonstrations that might seriously damage the standing of a very popular prime minister? No one knew the answer to this question.

The first significant SDF force departed for Iraq on January 16, 2004. The following day, three antiwar protesters walked the corridors of SDF apartment buildings in Tachikawa with flyers titled “Let’s Think Together and Raise Our Voices Against the SDF Deployment to Iraq!” They were arrested a month later and then detained in police cells for 75 days. Amnesty International called the three Japanese detainees “Prisoners of Conscience,” the only time it has applied the term in Japan.

The case was a severe test for Japan’s criminal justice system. Who would stand up to support the lonely trio? Would they find adequate defense counsel? How would the lawyers be paid?  Would the courts recognize constitutional protection for political speech?  The book provides the answers to questions like these.

Lawrence Repeta has served as a lawyer, business executive, and law professor in Japan and the United States. The primary focus of his advocacy and research is transparency in government. He has served on the board of directors of Information Clearinghouse Japan, an NGO devoted to promoting open government in Japan, and the Japan Civil Liberties Union.

Non-members can reserve at the reception desk by email (front@fccj.or.jp). Payment is in advance till Tuesday, December 20th, 2022. No refund is available unless the event is cancelled by FCCJ.