August 2022 Exhibition: The Fall of the 'Red Empire'

August 2022 Exhibition: The Fall of the 'Red Empire' - The Collapse of the Soviet Union / Russian Communism
Photo exhibition by Shisei Kuwabara
August 6 to September 2, 2022 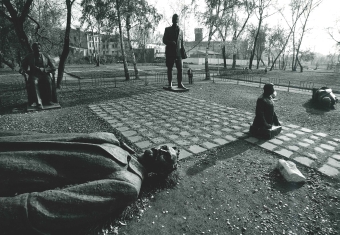 The Soviet Union, which had long competed with the USA. for global hegemony, finally collapsed in December 1991. Four months prior to this, on August 19, hardline conservatives in the Soviet Union’s Communist Party launched a coup d’état in the capital of Moscow. It was this coup that led to the eventual collapse of one side in the confrontation between East and West that had long shaken the world. As it happens, I was visiting Moscow at this time to cover a different story and so I had the rare opportunity to witness these historical events firsthand. I started photographing this unexpected coup d’état, horrified to see a tank unit, consisting of several dozen of tanks, rumbling towards the Kremlin. In addition to the huge nation of Russia, the Soviet Union also included fourteen other countries and I was to go on to photograph in several of these, including Ukraine, Georgia, Armenia, and Nagorno-Karabakh, where conflict continues to this day. On August 24, five days after the coup d’etat, the President of the Soviet Union and leader of the reformist movement, Mikhail Gorbachev, announced his retirement and this was followed by the breakaway and independence of the three Baltic States. In December, the Soviet Union, which had existed for seventy-four years since the Russian Revolution of 1917, came to an end, marking the end of this socialist superpower.

Shisei Kuwabara was born in 1936 and known for his documentary on the effects of mercury poisoning on the people of Minamata. Other major themes include "turbulent South Korea," "North Korea," "Vietnam War," and "the collapse of the Soviet Union." Kuwabara has published several photo books of his work and in 2014 received the Domon Ken Award. Kuwabara Shisei Photo Museum opened in his hometown of Tsuwano in 1997.