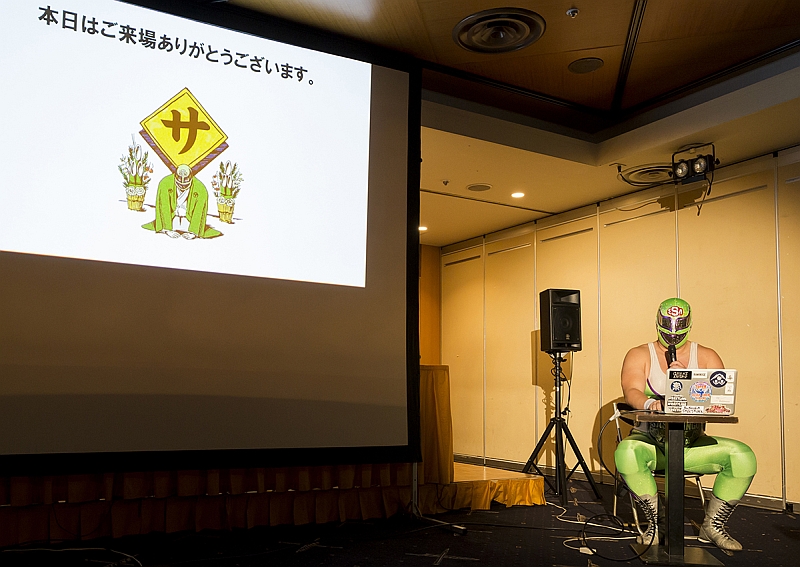 The Film Committee is committed to presenting the widest possible range of work to our audiences, and there’s no better proof than our sneak peek of DDT: We Are Japanese Wrestlers. We steeled ourselves for criticism that we shouldn’t be screening sports movies — especially when they’re not about Olympics athletes — but the criticism never came.

On the contrary, we discovered that a surprising number of FCCJ members are fans of professional wrestling, and they seemed thrilled to watch a theatrical documentary about one of Japan’s most popular teams, the Dramatic Dream Team, on the club's premises. They were also looking forward to the special preshow event, which the DDT’s legion of followers and Samurai TV had helped popularize.

From its beginnings with the great Rikidozan and Giant Baba, through Antonio Inoki, the spirit and presentation of Japanese “proresu” have been more high-minded, with fewer theatrics, than the western version. Still considered primarily a combat sport (thanks to Inoki’s introduction of traditional martial arts into the mix) proresu matches in Japan have always been considered real competitions, with grueling, body-slamming, high-flying action.

DDT, founded in 1997 by Sanshiro Takagi, began injecting matches with a far greater theatrical verve, incorporating stories and comedy, striking a delicate balance between the hair-raising and the hilarious, and bringing the team's style closer to the nonstop mayhem of western wrestling. Their astounding athleticism, creative costuming and dazzling choreography soon made DDT one of the top names in indie wrestling. DDT was dubbed “cultural” puroresu for its theatrics, as well as for Super Sasadango Machine’s introductory PowerPoint presentations before every tournament. Yes, PowerPoints. 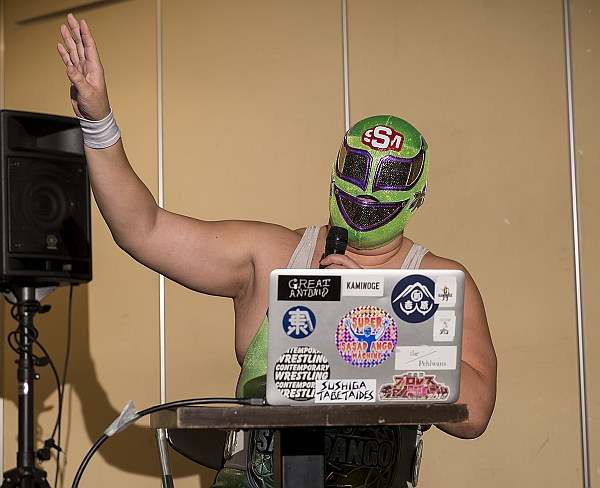 Only the third pro wrestler in its 71-year history to appear at FCCJ — following Rikidozan and Inoki — SS Machine himself burst into the screening room in all his green-spangled glory, and took the stage to wild applause. He raised his arm and…click, began his PowerPoint show, custom-created for the FCCJ crowd. For the next 30 minutes, the entire room was in a state of extreme merriment, with each new slide prompting a fresh round of appreciative chortles (along with giggles, guffaws and a few howls).

It was such a two-thumbs-up performance, such a combination of serious and silly, informative and entertaining, and all before the main event had begun, that no one wanted SS Machine to leave. (The senior managing director of Sakai Precision Molding in Niigata Prefecture, SS Machine is also an MBA holder, although this is not public knowledge, and a TV comedy talent.) 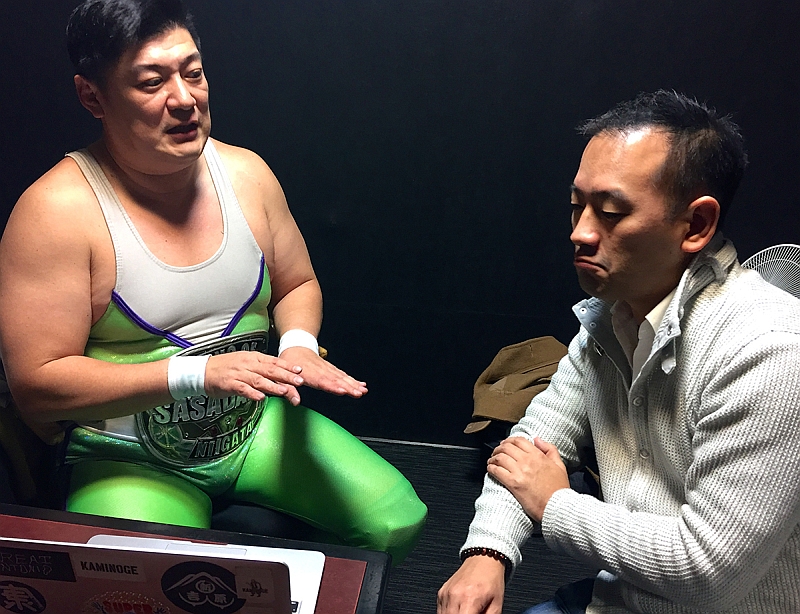 Ever the professionals, SS Machine and interpreter Taro Goto
rehearse their timing before the event. ©Koichi Mori

For those of us who have never attended a live match (ahem, guilty), and wondered how “puroresu” could have grown into a $120 million sport, SS Machine’s slideshow made it crystal clear. After colorfully introducing the wrestlers and the documentary team, including the “outstanding filmmaker” Muscle Sakai (SS Machine himself), he laid out the feud that erupted in 2014 between DDT (which he estimated made only $5 million last year) and New Japan Pro Wrestling ($32 million), the country's No. 1 agency, founded by Antonio Inoki. Apparently, New Japan’s MVP Hiroshi Tanahashi had fanned the fires of the feud by “sending shockwaves through the industry” with remarks slamming DDT’s low-level technique: “We’re competing at a whole other level from you.”

DDT decided to offer Tanahashi a chance to prove his supremacy, so invited him to a playoff. “It’s not easy being a little company taking on a big corporation,” SS Machine explained. “So we adopted the Lancaster strategy: to find the opponent’s vulnerability, and concentrate the attack on that weak point. Unfortunately, however, Tanahashi has no vulnerabilities.” The wrestler-filmmaker then described how he’d been at work, watching a plastic injection mold machine, when he realized how DDT could beat the MVP: “Let’s hypothesize that Tanahashi is the pro wrestling mold, and that we oppose this extremely precise instrument by pitting him against the unpredictable element of Ken Ohka [DDT’s least-experienced wrestler]. Then we may have a shot at victory. Businesses, whether large or small, show their true colors when they’re faced with a crisis. Did DDT’s Lancaster strategy work? You’ll have to watch the documentary.” 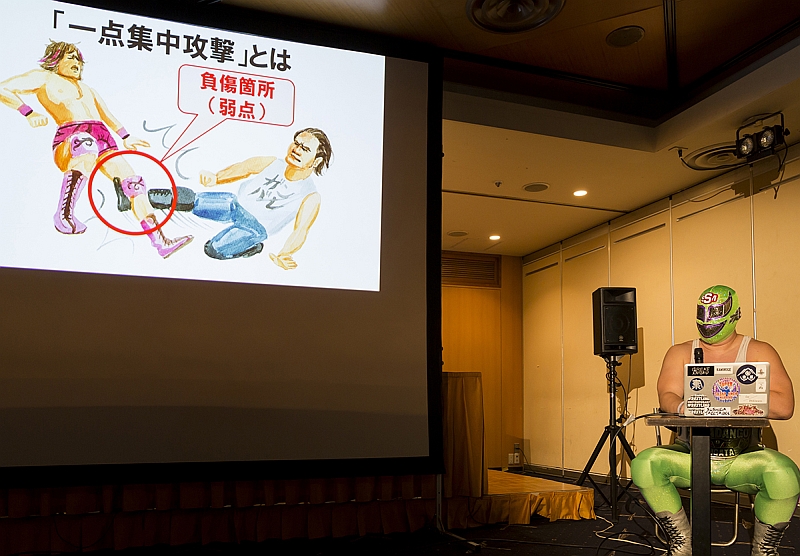 It was a most excellent setup for DDT: We Are Japanese Wrestlers, which opens with restless jumps from one contest to the next, as if it’s suffering from attention-deficit disorder, which quickly orients viewers to the style of coverage favored by Japan's premier sports channel, Samurai TV, where the team has a wildly popular hour-long timeslot. Documenting a year of matches and backstage stories, the film reveals that these rough-n-tumble customers have very soft underbellies indeed (they even submit to “popularity ranking” contests, much like boy bands). By the time Ken Ohka and Harashima finally get their chance to go up against the bruisers of New Japan Pro Wrestling in late 2015, the audience is resoundingly on their side. Not quite a classic underdog contest, since the DDT have fought their way to a No. 2 ranking, there is still much at stake. And Tanahashi makes the perfect villain. 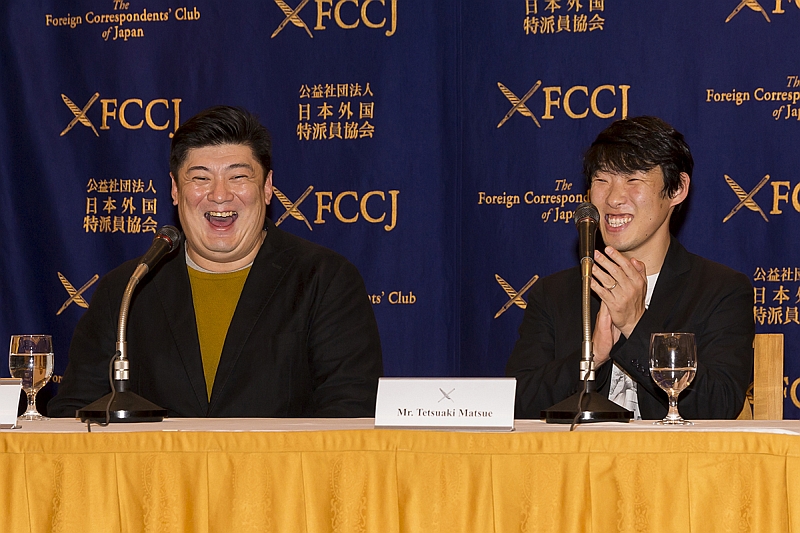 As DDT approaches its 20th anniversary, the film is a fittingly scruffy tribute to the team’s staying power.

Following the screening, Muscle Sakai (SS Machine in street clothes) returned with Tetsuaki Matsue, his co-director and the acclaimed documentarian behind award-winning films Annyong Kimchi, Live Tape, Tokyo Drifter and Flashback Memories 3D. The first question was about how Matsue got involved in the project. “The DDT president asked me about making a documentary in the spring of 2014,” he said. “He suggested following the team for a year. But I thought it would be interesting to follow one subject, and I was always fascinated with Muscle Sakai, whom I’ve known for 10 years.”

He later expanded: “In summer, Mr. Sakai was in the ring at Ryogoku and announced that we were doing the film, and said that it would be in 3D. At the time, it wasn’t a joke. I had contacted specialists and we had shot for about a year. I started editing it, but it just didn’t work as a film. That’s when I proposed refocusing on Muscle instead. I always felt that there was something about his performance and aesthetic that was similar to my approach to documentary. I also felt like the [DDT-New Japan] match was a nice narrative center.”

Matsue went on to explain, “I’m 39 right now, and Muscle is also 39. If you look at the whole DDT culture, there’s something about it that looks like a college festival. What they do requires such an expenditure of energy; they put everything into it. There’s a kind of exuberance there that I was drawn to. The subject matter is so enjoyable that, even at my age, I was able to tackle this project. I think this film might appeal to people in our age group as they look back, nostalgically, at the phenomenon of going all out.” 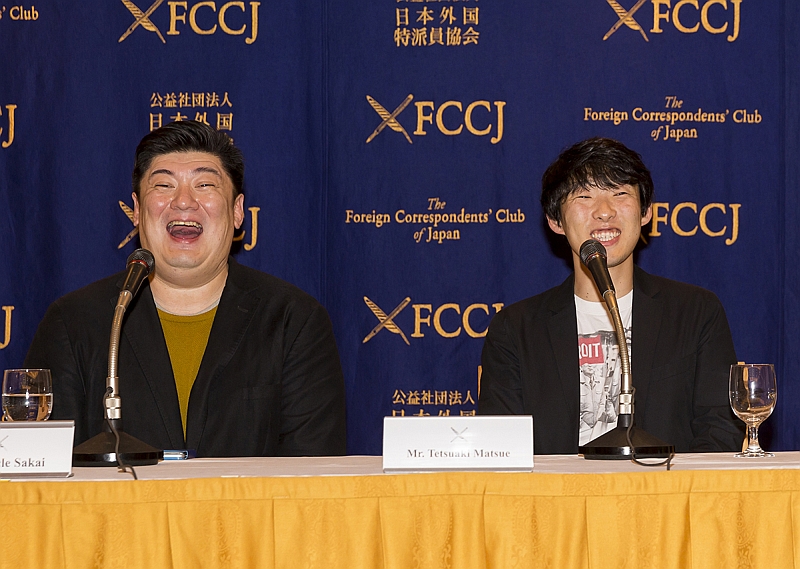 Asked how he got into proresu, when he clearly had a lot of other options, Sakai admitted, “The president of DDT asked me if I wanted to try wrestling. At the time, I was a university student and I was the team’s videographer. Mr. Takagi came to me and said, ‘You’re a big guy. Why don’t you try wrestling?’ And here I am.”

But where did the PowerPoint presentations come from? Said Sakai, speaking metaphorically: “As pro wrestlers and mold makers, we’re often overwhelmed by these big corporations who come at us with complex marketing and advertising strategies, and PowerPoint presentations with business ideologies. They come at us with graphs and try to embroil us in something we don’t understand, and I felt it was important to understand. I gave my first PPT presentation in 2014.”

A DDT fan in the crowd asked whether he thinks things have changed, now that Tanahashi has fought against the underdogs. “There are a lot of inter-organizational feuds,” Sakai admitted. “Ever since that incident, I’ve been asked to officiate and be a peacemaker. Whenever there’s some kind of trouble, they bring me in as a troubleshooter. I’ll continue to serve in any capacity that may help.”

Matsue was asked whether he thought Ken Ohka had international appeal, and had chosen to highlight him in the film for that reason. “We actually filmed a lot of the DDT wrestlers,” responded the director, “and it wasn’t our intention that Ohka-san would be so central to the story. He just kind of ended up that way. Some of the wrestlers look like stars on screen, either because they emit a certain star wattage or because they seem to invite the spotlight. Ohka-san doesn’t have star wattage, but it seemed that the camera always turned to him. I thought, that’s the kind of character we want.” 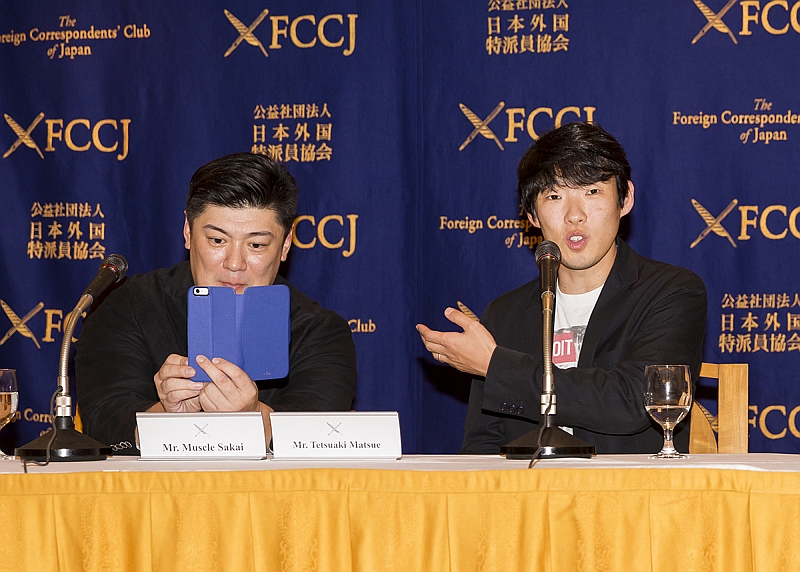 Sakai lines up the nameplates for a selfie with FCCJ's famous banner. ©Mance Thompson

Sakai added, “If he were the type of wrestler who deserved international acclaim, I believe that WWE would’ve approached him by now. So the probability of him going international is pretty low. But you never know. Maybe after this FCCJ screening, the film will get seen overseas and a big promoter will discover him.”

This prompted a journalist to ask whether the English title had been chosen with a global audience in mind. Said Sakai: “In Japan, whether you’re wrestling in the DDT or New Japan Pro Wrestling style, I think a lot of Japanese fans are familiar with a lot of the elements in the film. But we chose to put ‘Japanese’ in the title because we’re proud of our wrestling, and we want international audiences to see it.”

Matsue admitted: “Sakai-san came up with the English title and he really pushed for it. Initially, I had in mind calling it DDT: Ego Search." He laughed, "But I’m actually awful at coming up with titles for my own films. Everyone always winds up disagreeing.”

We may never see this sport at the Olympics, but that doesn’t mean its practitioners aren’t every bit as dedicated to training and determined to win as any Olympic athlete — nor that its many millions of fans aren’t as justifiably devoted. Why should trampoline and synchronized swimming be the only contests that inspire levity during the Olympic Games? It’s too late for 2020, but with athletic prowess of this heart-pounding level, surely there’s an outside chance for pro wrestling on the next go-around? 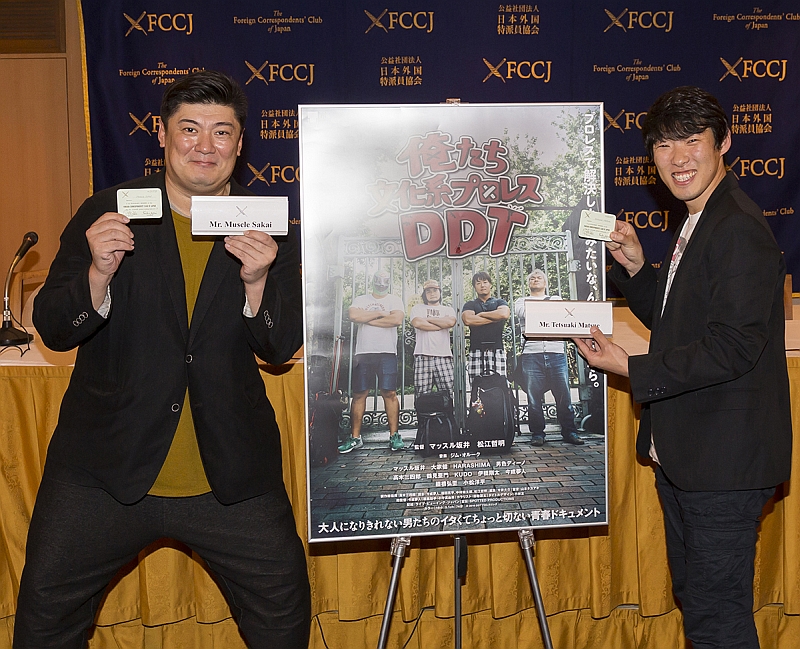 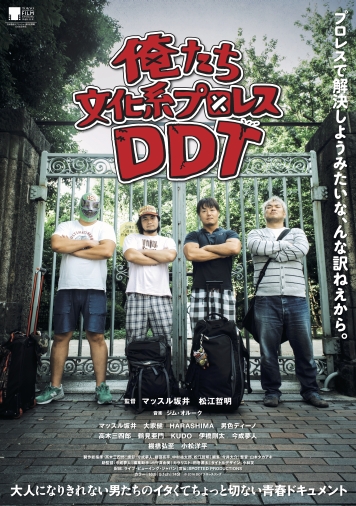