THE EMPEROR IN AUGUST (Nihon no Ichiban Nagai Hi)

THE EMPEROR IN AUGUST 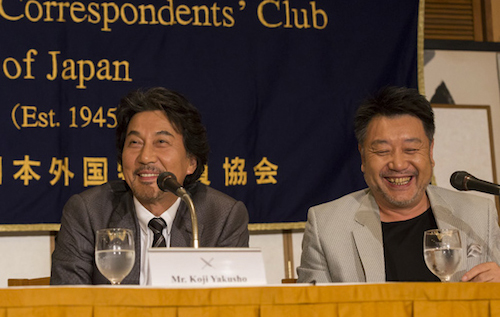 Koji Yakusho and Masato Harada each mark their fourth appearance at FCCJ,
as well as their 20th year working together. The award-winning team behind 2012’s
Chronicle of My Mother, they first collaborated on the unforgettable Kamikaze Taxi in 1995.

FCCJ’s SRO audience wasted no time in drawing connections between the subject matter of Masato Harada’s new film The Emperor in August, which recounts the four months leading up to Emperor Hirohito’s historic broadcast announcing Japan’s surrender on Aug. 15, 1945, and the current state of affairs in Japan.

In the lengthy and occasionally allegorical Q&A session following the screening, Harada and his star, Koji Yakusho, chose their words carefully, but did not mince them.

Queried about the film’s focus on the indecisiveness of Prime Minister Suzuki’s cabinet (which stalled so long over the language of surrender following the Potsdam Declaration, that it prompted the US to drop bombs on Hiroshima and Nagasaki), Harada noted: “If we look at the Abe administration dealing with issues like the new national stadium, it can seem that indecisiveness is a national trait.”

Harada's research into the film's events made him an expert. He insists that he is neither rightwing nor leftwing. "I am impartial."

Yakusho, responding to a question about the film’s appeal overseas, said: “This is a film about how Japan ended the war. But it has a simple message that we can all understand: It is easy to start a war, but it is very, very difficult to end one.”

Harada emphasized, “I do want people outside Japan to see the film… I’m sure many of you have read Herbert Bix’s Hirohito and the Making of Modern Japan, but unfortunately, it distorts the emperor’s image based on leftist ideology. I’m not a rightist, but I do think facts should not be overruled by ideology.” (Bix’s 2001 Pulitzer Prize-winning work found Hirohito complicit in Japan’s “fever of territorial expansion and war,” and inflamed an ongoing debate about the extent to which he had ruled or simply reigned.)

Harada was asked what he thinks of the imperial system in general. “At the time of the war,” he responded, “the emperor was considered the head of the house, the head of the family, and I feel this type of thinking was able to save Japan and end the war. If a politician like Prince Konoe or General Tojo had [tried to issue] the decision, Japan would not have survived.”

Yakusho stressed the ambivalence his character felt: "If you don't feel it too, then I've failed as an actor."

FCCJ President James Simms praised The Emperor in August for its “richly detailed characters and its ambivalence,” and drew laughter for his comment about the “absurdity of people trying to do a coup on bicycles” (as the rebel soldiers attempt in the film). But he also voiced a commonly held view by the international community regarding Japanese resistance to critical self-evaluation at this time of year: “I’ve been here for about 20 years,” said Simms, “and it’s always kind of heavy to be here in August, because it seems like a lot of the television dramas and documentaries and movies are sort of one-sided. Japan is always a victim. We don’t see multiple viewpoints, just Japan the victim and not, for lack of a better word, a perpetrator. Higaisha, kagaisha. In your view, how do you see Japan in August?”

Harada agreed. “I feel the war should never be portrayed from the standpoint of the victim only. There should be a balance with the wartime atrocities.” He recalled that he grew up watching American films, and “until I was about 10 years old, I was always on the side of the Allies. After that, I started learning Japanese history.”

He continued, “There’s a scene in the film, where the emperor is walking in the garden, lamenting how the war has been going on for 15 years, as long as the Onin War. But actually, 15 years prior to this is when the Manchurian Incident occurred, when Japan began invading China. Maybe the connotation is that the war of aggression should end.”

Both men fielded a series of tough questions — and some lightweight ones — with candor and wit.

Harada also mentioned a 1937 journal entry penned by Yasujiro Ozu, a director he greatly admires, concerning his experiences on the Chinese front. “He wrote that all the Japanese soldiers heading to the frontlines always smelled of alcohol. Just 2 weeks after he wrote that, the Nanjing Massacre occurred.”

In earlier remarks, Harada said that one of his impetuses for making the film was personal. “In 1945, my father was 19 and he was stationed at Chiran, at the southern tip of Kyushu, the kamikaze airbase. He was only digging trenches, but if the war had continued, I think he would’ve been one of the casualties. So for many years, I’ve thought that the emperor’s Imperial Decision saved my father.”

Renowned for the exhaustive research he conducts before writing his scripts, as well as for the English fluency he developed during 20 years spent in the UK and US, the director adapted Kazutoshi Hando’s nonfiction novels Nihon no Ichiban Nagai Hi (Japan’s Longest Day, 1965, 1980) and the followup Seidan: Tenno to Suzuki Kantaro (Imperial Decision: The Emperor and Kantaro Suzuki, 1985), both of which were based on extensive eyewitness interviews, for The Emperor in August.

“In 1967, when Okamato Kihachi adapted Mr. Hando’s first novel into the film Japan’s Longest Day,” said Harada, “it was prohibited to show the emperor’s face. So the actor portraying [Hirohito] had to be shot from behind, or in long shots. It was difficult, therefore, to depict the nuances of what was going on in his mind. In the 21st century, Issey Ogata portrayed the emperor in Alexander Sokurov’s The Sun, and we saw him in closeups for the first time. I realized that we could finally portray the emperor as the protagonist of a film like Japan ’s Longest Day.”

“I drew heavily from Mr. Hando’s novel Seidan for The Emperor in August,” he continued, “because it depicted the events of the final four months of the war, not just the final day, and explained why he was not able to issue an Imperial Decision [to prevent the war from continuing] earlier. By combining both books, we’re able to understand why it took so long for the decision to be reached.”

Yakusho was asked about his preparations for his role. “I’ve been acting for many, many years now and I’m not sure about my ‘process,’ he said. “But whenever I work with Mr. Harada, he sends a lot of research materials, and I always begin by reading them all.”

In The Emperor in August, Yakusho plays Korechika Anami, the man who led Japan’s War Ministry in the final months of World War II, a warrior who wants to lead his troops to the bitter end, but who also reports directly to his sovereign, as he makes clear in the film. His devotion leads him to support the cause of peace.

“I’m aware that there are different interpretations of Minister Anami’s character and role,” said Yakusho, “but as far as I’m concerned, once the emperor made his decision, [Anami] gave up on pursuing a decisive battle at home. But he was also aware that the younger officers were planning a coup, and he was caught between those officers and the emperor, a very difficult position. I wanted to portray that dilemma. When I look back on that period now, especially after the bombs were dropped, I’m grateful that the emperor, Prime Minister Suzuki and Minister Anami worked together and were able to end the war.”

Harada affirmed, “My belief is that if Mr. Anami had resigned, the Cabinet would have fallen apart and led to the decisive battle at home. I really wanted to show the ambivalence that Mr. Anami felt.” 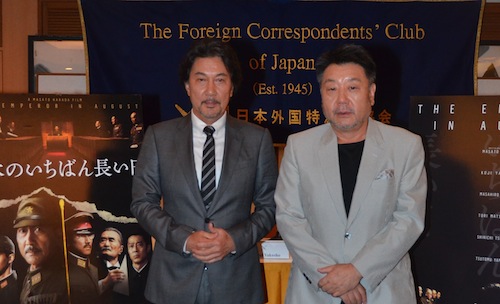 The director and star pose with the Japanese and English-language posters.

When The Emperor in August begins in April 1945, the Japanese military had already been in control of domestic and foreign policy for a decade, and the Japanese people were uncertain about the war’s outcome —the government had strictly censored and rewritten the news since 1938. The military’s strategy was to continue pushing for the decisive battle (Kantai Kessen) by drawing the US fleet into a titanic fight at sea, somewhere off Japan’s southern coast. There were still 270,000 Japanese soldiers on various war fronts, and the concept of surrender was not in their vocabulary.

Once the Allies have broadcast the Potsdam Declaration in July, demanding unconditional surrender, the Imperial Cabinet convenes to begin an endless debate: Do we follow Emperor Hirohito’s inclination to accept the declaration or do we practice mokusatsu (kill it with silence)? Would the Potsdam accord preserve kokutai (national polity), or would Hirohito be subjugated to the Supreme Commander of the Occupation forces… or worse, be help accountable for the war?

Anami argues for the long-planned decisive battle, which would allow his troops to die with honor; but he knows it will also cost untold civilian lives. After endless Imperial War Council debates over wording, Hirohito informs his ministers that Japan must accept defeat, and lays plans to announce the war’s end to his people in a historic radio broadcast at noon on August 15. But when word of the recording leaks to the army, a group of young firebrand officers moves forward with plans for a violent coup.

It is the next 20 hours that prove decisive for the fate of Japan, and which provide the most tense, thrilling and indelible moments in The Emperor in August. As the clock ticks toward Hirohito’s historic address, as the Cabinet resigns itself to ritual suicide, as the military rebels storm the Imperial Palace, the full absurdity and futility of war are revealed.

Nobody shoots a group of older men sitting around arguing with as much visual interest, dramatic intensity and individual specificity as Harada, nor recreates period Tokyo with such astonishing beauty and terror. He also draws exceptional performances from his veteran actors, and portrays an impossible — and impossibly complex — situation with remarkable clarity, as well as an admixture of regret and admiration.

The film is sure to be a major box-office draw in Japan during the 70th anniversary of World War II’s end in August, and beyond. 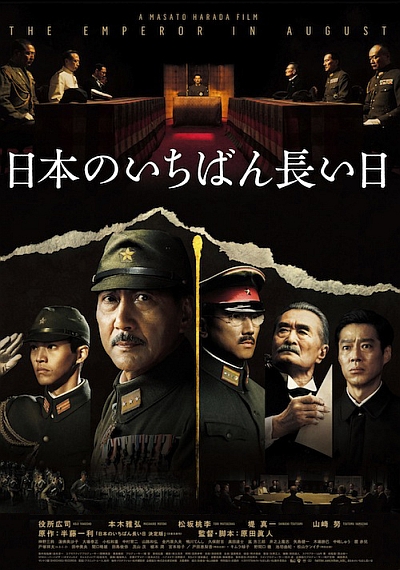