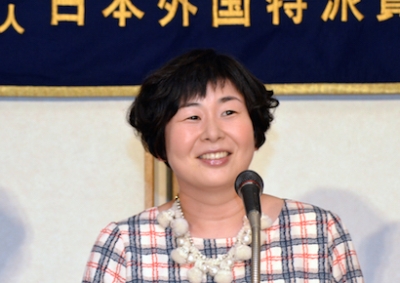 Miyuki Oshima dreams of winning a Japan Academy Award for Best Actor for her performance as the middle-aged male title character in cult comedy director Yosuke Fujita’s new film, and if anyone deserves it more than she does, let him come forward. Remember Jaye Davidson in Neil Jordan’s The Crying Game? Oshima is that good. Good enough to fool the Western journalists in the audience who had never seen the comedienne on TV, where her Morisanchu trio is ubiquitous. She’s already won a Best Actress trophy at Montreal’s Fantasia Film Festival for her gender-bending feat; if the Japanese media turnout at FCCJ is any indication, her role is already earning her enormous attention at home.

Looking like herself, ie., lovely and feminine, at the Q&A following the screening of the tongue-twisting Fuku-Chan, Oshima smiled happily as her director explained just how she came to play the unusual role: “The genesis of the project came from the idea of having Ms. Oshima play a man,” explained Fujita. “If she had said no, I really can’t think of any other actress or actor who would have been suitable.” Why? “It’s her face that attracted me. She has the kind of face the Japanese really love, a really familiar face. I think she has the perfect face for a comedy that people can relate to and enjoy … It is truly nostalgic [natsukashii]” He also admitted that he’d wanted a woman for the role, so Fuku-chan would be less lewd than if a man played him.

Oshima said she was surprised to hear that Fujita needed her face to bring Fuku-chan to life. “As a matter of fact,” she pointed out, “Yoshiyoshi Arakawa looks a lot like me, and I think he could’ve done it.” (She’s known for her self-deprecating humor.)

How did Oshima prepare for the role? “Even before we started shooting, I tried to do manly things,” she said. “I never took a bath, I just took showers; I didn’t have any massages or eat any organic food. I also stopped sleeping in bed and just slept on the floor.”

Producer Adam Torel piped up: “Do men not take baths? I’ve done it. And had a massage. And eaten organic food.”

Oshima admitted she also took cues from Tora-san, the beloved (and very natsukashii) character in Yoji Yamada’s long-running series It’s Tough Being a Man. “It was the director’s suggestion that I watch him,” she said, “and I watched the whole series. It was very educational, in the sense that I wanted to know how to depict a very lovable character.”

Fuku-chan is also a very lovelorn character, after his junior high crush turns up at his rundown apartment building (that would be “Fukufuku Flats”) one day, two decades after being the agent of some painful bullying. Tatsuo Fukuda — “Fuku-chan” to his friends — has spent the years since then painting buildings by day and beautiful kites by night. But his greatest artistry is reserved for mediating disputes and helping those in need. The misfits in Fukfuku Flats keep his loneliness at bay, and his pal Shinmachi (Arakawa) tries to light a fire under his love life. But his timidity around women is downright unnatural until a budding photographer named Chiho (Asami Mizukawa) enters his life, and attempts to make amends for the past.

Yosuke Fujita proved in 2008 that no one can make an audience love a loser the way he can. His Fine, Totally Fine (Zenzen Daijobu, starring the oddball Arakawa) was a deadpan delight about two sadsack best friends who woo the same klutzy girl, punctuated by outlandishly ghoulish pranks. It had a wildly successful ride on the international festival circuit, scooping up numerous awards and several foreign distribution deals.

The equally offbeat Fuku-Chan has also been rapturously received overseas ahead of its Japanese debut, disproving the old saw that comedy is the most difficult genre for crossing borders. Thanks to its pioneering coproduction scheme, it is also already set for release in half a dozen countries, an unprecedented feat for a small Japanese film without Kurosawa or Miike at the helm.

Marking the first-ever Japan-UK-Italy-Taiwan-Germany coproduction, Fuku-chan was backed from the script stage by veteran distributors of Asian film who are hoping to “change the entire playing field and help Japanese non-genre and independent films reach the largest international audience possible,” according to their press release. Producer Adam Torel, head of the UK’s largest contemporary Asian cinema distributor, Third Window Films, and a driving force behind the collaborative project, was asked about the difficulty in financing the film. “I think it can be hard for a midlevel-budget film, but obviously, having someone like Oshima-san attached, a star like that, it’s not quite as hard.” 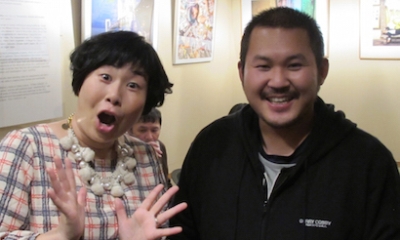 Hirobumi Watanabe, director of the 2013 indie hit And the Mud Ship Sails Away,

tells Oshimathat he's from her small hometown in Tochigi.

Fujita concurred: “The film production scene in Japan right now is very polarized. It’s either films with big budgets coming from TV stations, or small independent films with budgets of around ¥1 to ¥2 million. Midsize films like this one are very hard to make these days, so I’m very grateful that all these international parties came onboard to make this work.”

Time will tell whether the formula helps revive a seriously flagging indie film scene in Japan. Meanwhile, we’ll soon have a chance to see whether Miyuki Oshima can make history at the Japan Academy Awards. Nominations for Best Actor (and other categories) are due out in January.
— Photos by Koichi Mori and FCCJ. 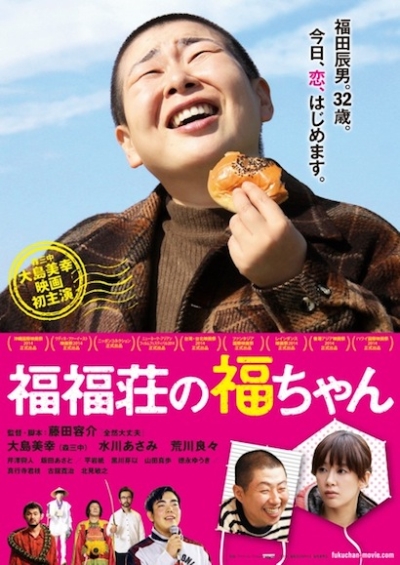