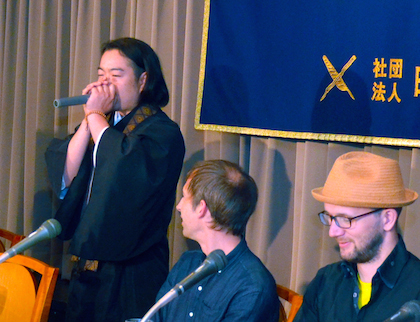 Ta2mi demonstrates his beat-boxing technique before the Q&A.

Kicking off our Q&A session following the screening of KanZeOn, Buddhist monk Akinobu Tatsumi (a/k/a Ta2mi) entered the room in full ceremonial garb and slowly approached the front, microphone pressed close to his mouth. The loudspeaker erupted with an extraordinarily percussive beat-boxing routine and the audience burst into delighted applause.

It was a visual-aural juxtaposition that could sum up Japan’s famed incongruities in a nutshell.

Some of these are evident in the gorgeously photographed film, which one audience member termed “exquisite and profound.” Enveloping viewers in the sights and sounds of a mostly ancient Japan, moving evocatively from forest to temple to mountaintop, celebrating the deep resonance of sound within the nation’s cultural identity — its songs, stories, rituals, performances, faiths and traditions — the documentary explores the mysterious bonds between the traditional and modern, between the spiritual and sensory. 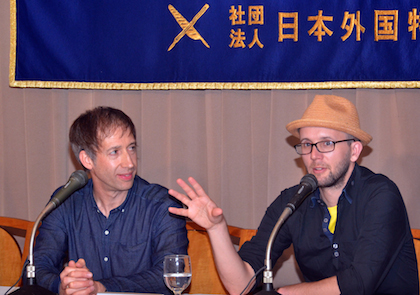 Luscombe and Cantwell talk about the special qualities
of sound as expressed in haiku poems.

Tatsumi, a Jodo Shinshu Buddhist monk from the countryside near Kumamoto, is one of the three musicians around whom KanZeOn is built, allowing them to guide the way through their words and performances. Shō player Eri Fujii and Akihiro Iitomi, an expert in the kotsuzumi drum and a Noh theater master are the film’s other guides.

Directed by Neil Cantwell and Tim Grabham, both British, the film's belated first screenings were held in Kagoshima and Kumamoto last week. While living in Fukuoka for two years as an exchange student, as Cantwell explained during the Q&A session, “I developed an interest in Japanese religion and prepared to do the Shikoku 88-temple pilgrimage… But I’m a musician, and actually, the most progress I made with Japanese language and understanding Japanese culture came from playing with people. You can communicate through music when you don’t speak much of the language.” Cantwell gigged with Tatsumi, performed on the same concert bill with Fujii, and studied for six months with Iitomi.

Back in the UK and talking with Grabham about making a film together in Japan, the three musicians became obvious choices. “Religion was playing an important part in their lives, but in a different way for each of them,” said Cantwell. “And that’s where the film came from.” It took five years to complete, since it was entirely self-funded. But it has been screened continuously around the world since its premiere in 2011.

KanZeOn enlightens without explaining, and mesmerizes without demanding full understanding. Still, it was not surprising that one member of the audience questioned the lack of narration. Said Cantwell, “Ultimately, our decision not to include narration came from a worry I had about appropriating Japanese culture and doing something that would be disrespectful. That informed the decision to, as much as possible, just present these performances and the thoughts and feelings of these people that we were making the film with. It was very much a collaborative experience.” 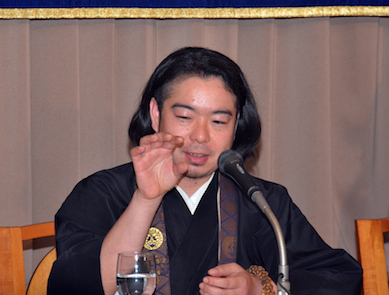 Tatsumi selected at type of shishiodoshi (scare the deer) as his favorite sound:
when water, in a bamboo rocker arm, hits the rock below in Japanese gardens.

Tatsumi noted that the collaboration had been “very exciting for me. I’m happy that so many people could be united by the film, and that I could meet so many new people through the process.” He also thanked his mother, who used to work at Yamaha and made sure he got an electric keyboard as a boy, and his father for allowing him to continue a music career in tandem with his religious work.

Joining Cantwell and Tatsumi for the Q&A was Nick Luscombe, who is launching a project with Cantwell to create a crowd-sourced “self- portrait” of Japan. A radio broadcaster for BBC Radio 3 as well as a musician, Luscombe is the founder of Musicity, a web app (soon to be an iPhone or Android app) that allows travelers to go to specific locations around the world, and listen to music there that was created by commissioned artists in response to an aspect of the location that inspires them.

Building on that idea, Luscombe and Cantwell are now compiling a prototype version of a sound map for the Japan Sound Portrait, using scenes from KanZeOn and a first round of public submissions. They’re encouraging people from all over the country to contribute 17- second audio/video clips (reflecting the 17 syllables of haiku, which often rely on sounds for their impact) celebrating the sounds they cherish. They envision going beyond just creating a sound map, and foresee a film version as well as an immersive virtual reality environment in which certain locations will be explorable online via 360-degree, 3-D footage (technology coming this year from Oculus Rift and Sony Morpheus).

“The idea is to get as many people as possible to contribute to this project,” Luscombe told the audience. It’s very simple to do, just email the tracks [see how below] and we’ll get them online. It’s a long-term project, and we’re hoping that it develops over the next five years. We’re asking people to record whatever sounds they can — anything that’s interesting.”

Just in the past week, the two have received a slew of submissions, some of which may not necessarily qualify as “interesting.” “Someone sent in the sound of their car’s engine,” laughed Cantwell, “and it’s a German car.”

kanzeon-3Luscombe, Tatsumi, Cantwell and Emiko Odera, who was the translator for the film crew.

Luscombe continued: “There are so many sounds that are endangered because of the way that technology moves so quickly here. For example, the sound that you push to cross the road, that’s going to change sometime soon.” He agreed with a suggestion from the audience, that the posts be time-tagged as well as place-tagged online, to demonstrate the evolution of sounds in the same location, even over just five years.

Added Cantwell: “We really want to make a sonic world. You can combine elements of a documentary film with elements of computer games, and we can begin to manipulate these environments that we capture in a way that would say more, perhaps, about the character of sound and why people in Japan seem to care more about the texture of sound that in other parts of the world.”

Asked why they didn’t plan to create a global sound portrait, Luscombe laughed and said they might. But: “There’s just so much more going on here, sonically. People comment on it quite a lot. It’s a really rich resource of sound. It’s a great place to start.” 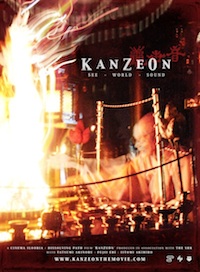