SPECIAL SCREENING of Kakekomi and Q&A in collaboration with TIFF

Ando, Harada and Shiina listen as Kiki declares she just "tagged along with the director" for the event.

Anyone who has attended FCCJ’s screenings over the past eight years knows that our emphasis has been on introducing Japanese films and filmmakers to foreign audiences through the Tokyo-based journalists, critics, festival programmers and cinephiles who join us for our events. We were thus extremely gratified to hear that the 28th Tokyo International Film Festival (TIFF), running from October 22 - 31 in Roppongi and Shinjuku, would debut not one, but two new sections devoted to Japanese film: Japan Now and Japanese Classics.

When the full lineup was announced on September 29, the news was even better: three Japanese titles had made it into the main Competition section, and there were to be over 50 more English-subtitled films by a range of Japanese directors at the festival, from the likes of Akira Kurosawa and Kon Ichikawa (Classics) to Hirokazu Kore-eda and Sion Sono (Now) to Kohei Oguri and Koji Fukada (Competition), along with a 10-title tribute to Ken Takakura,

Perhaps most exciting of all, TIFF announced that it had selected Masato Harada as its inaugural Director in Focus, and unveiled what amounts to the first mini-retrospective of his work. Over a 30-year career, Harada has created a range of compelling films that are both social criticisms and world-class entertainments, and he is one of a small handful of Japanese who are comfortable directing overseas, as well.

Ando and Harada share a laugh; Harada listens to Kiki describe his skill.

The Film Committee has had the honor of screening three of Harada’s recent films, and we were thrilled to be able to bring his early summer blockbuster, Kakekomi, to the club for an English-subbed encore.

Before the screening, we welcomed TIFF Director General Yasushi Shiina, TIFF Programming Advisor Kohei Ando, Harada and legendary actress Kirin Kiki — who won the Japan Academy Award for her titular role in Harada’s 2012 Chronicle of My Mother and also stars in Kakekomi — to discuss the festival’s new emphasis on local cinema.

Noting that there are over 500 Japanese films released every year in Japan, Shiina said, “This is my third year as the director of TIFF, and I’ve been wondering how best to introduce Japanese films and filmmakers to the world. We wanted to create a selection that would allow visitors to TIFF to see the full spectrum of films, to see what’s happening in the industry right now. We also wanted to focus on getting more recognition for Japanese filmmakers in overseas markets, and that’s why we created the two new sections, Japan Now and Japanese Classics. We look forward to welcoming audiences from as many countries as possible.” 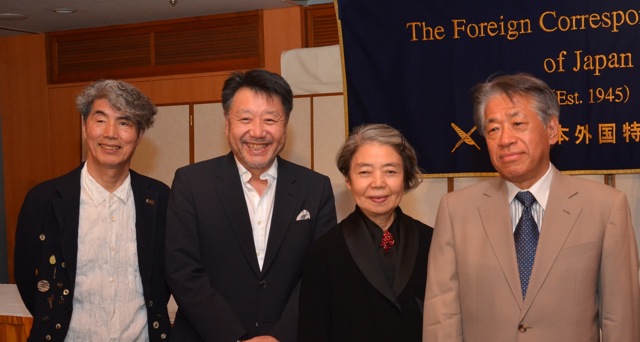 Kohei Ando, a filmmaker, producer and popular figure on the international film scene, was selected as the first programming advisor for the Japan Now section. He noted: “People often say that if you see three films from one country, you can learn a lot about that country. The concept of Japan Now is to help you learn more about Japan. We narrowed our selection to 11 films, one of which is a family story from maestro Yoji Yamada and another of which is from Hirokazu Kore-eda, also about a contemporary family. If you watch just these two films, you’ll have an understanding of the diversity of Japanese families today.”

“We decided to focus on Mr. Harada as the first Director in Focus,” Ando continued, “because we believe he deserves increased international recognition as a master filmmaker, and we also hope Japanese audiences will be reminded of his extraordinary talent.” 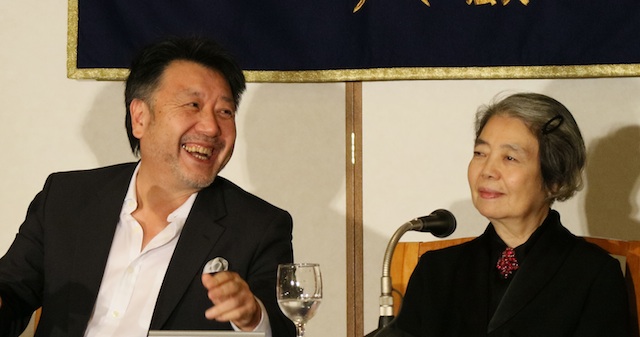 Harada and Kiki have collaborated on only two films; here's hoping they double that number.

Harada said, “I’m not sure whether I belong to Japan Now or Japanese Classics (much laughter), but I’m honored to be selected and to show these five films. The last time I had a film shown at TIFF was in the Competition section 22 years ago, with Painted Desert. I’m very happy to bring my work to a festival in my own country, and I look forward to meeting audience members from all over the world.”

After joking that she had just “tagged along with Mr. Harada,” Kirin Kiki got more serious. “Mr. Harada is so enthusiastic about the works of other directors,” she said, “he’s always mentioning certain scenes in films by Kurosawa, Ozu and Kihachi Okamoto with such passion and enthusiasm, it’s one of his charms as a director. I see him trying to be an even better filmmaker than these masters, sometimes succeeding, sometimes not. But he’s very, very skilled, and… yahari, umai! (he’s wonderful!).”

The Director in Focus retrospective will feature English-subtitled screenings of Harada’s Kamikaze Taxi (1994), Climber’s High (2008), Chronicle of My Mother (2012), Kakekomi (2015) and The Emperor in August (2015). How did Ando and Harada arrive at this selection? “It’s simple,” Harada explained. “These five films were all rejected by the Cannes Film Festival.”

Ando interjected, “It’s really Cannes’ loss — we beat them this year by bringing these five films to TIFF.” 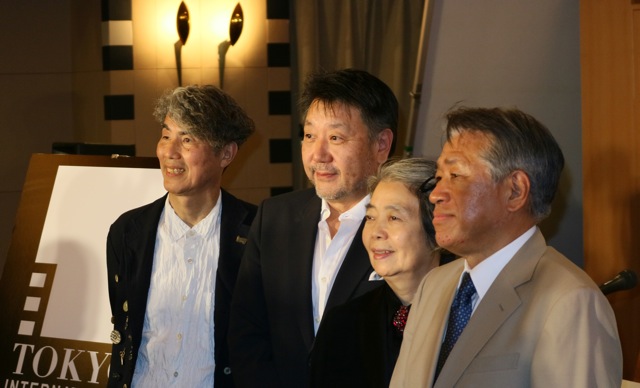 Later in the evening, following the screening of Kakekomi, Harada’s first-ever jidaigeki period piece, the director and his star appeared for a Q&A session that was one of the most relaxed and intimate we have ever hosted. Speaking in English throughout (except when making remarks directly to Kiki), Harada fielded questions on a range of subjects, beginning with the reception of his films overseas.

He noted that audiences in Canada and Malaysia had laughed wildly over Kakekomi’s honey enema scene, and applauded when one of the antagonists is killed, a real difference from the more reserved Japanese audiences. He then revealed that he thinks not only about how his films will be received internationally while he’s directing them, but that he even considers how certain lines of dialogue will play in the subtitles. For Kakekomi, he changed character names from the original source novel so they would be more easily rendered in the subtitles.

Kiki stayed on for the Q&A after the screening, and kept everyone in stitches, including
interpreter Mihoko Imai.

Kiki mentioned that she and Harada had argued rather extensively about certain casting decisions, but that she feels “completely comfortable” working with him, and was pleased that he could quickly make decisions about suggestions she would make. Harada countered, “It’s true that everyone was afraid of Kiki-san on set, but with her, there’s never a dull moment. Even though she complained about the casting, she can really create an energized atmosphere. I highly respect when she makes suggestions. She can come up with fabulous creative ideas, although I’m not sure she would make a good casting director.”

Both director and star continued to affectionately thrust and parry. “I think he’s a masterful, masterful director,” said Kiki. “But I can’t help complaining a bit. I don’t want to compare his work with other auteurs, but it is definitely worthy of more international praise. However, I think he should be more relentless in his perfection of small details. And he needs to put more of himself into his films. When he’s finally able to do that, I think we’ll see something different. He’s a world-class director now, but if he makes an effort to do what I’m suggesting, he’ll be even greater.”

Harada’s 23 films over the past 30 years have addressed a wide range of subjects — what he terms “Hawksian relationship dramas” in an “ old-school style”— that are perhaps not as embraceable by younger generations as the more gonzo style of Japanese genre directors who have found overseas followings. But his work is ripe for rediscovery.

And fortunately, we can expect it to continue. Harada hinted that another collaboration with Kirin Kiki is sure to occur: “I have something in mind, which I can’t announce yet. It’s a historical piece and the character I have in mind for Kiki-san is someone that no one would ever imagine...” 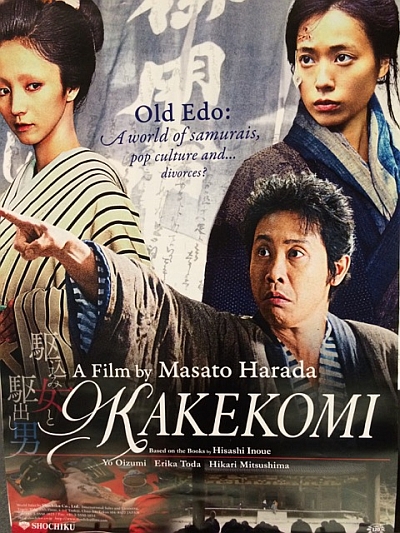