WALKING WITH MY MOTHER (Houyou)

WALKING WITH MY MOTHER 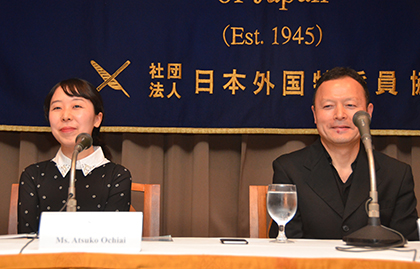 Ochiai has produced all six films by Sakaguchi,
beginning with the award-winning Blue Tower in 2000.

During the exceptionally long and insightful Q&A session following the screening of Walking with My Mother, a Japanese journalist in the second row repeatedly dried her eyes and quietly blew her nose, seemingly unable to stem her grief over a private loss. Or perhaps it was regret. Both emotions — and many others, from frustration to despair to hope — are evoked in abundance by Katsumi Sakaguchi’s documentary, which focuses on his mother’s late-life journey over a four-year period.

As the film opens, 78-year-old Suchie Sakaguchi is distraught and distracted, over-reliant on tranquilizers and undergoing a personality shift because of them. She has not recovered from her daughter’s death to illness three years earlier, and now her husband has been hospitalized, with diminishing chances of survival. Suchie’s devoted son arrives to help out, and begins recording her life so as to better comprehend her suffering. Soon, the camera becomes Katsumi’s way of coping, as well as of distancing himself, as his father’s health deteriorates and he eventually dies. Suchie’s mental state declines further, and only when she walks — no matter what the hour — does she become less agitated.

But then, miraculously, her sister Mariko arrives and a rescue effort begins. Suchie goes back with her to their hometown on the southern island of Tanegashima, which has changed much in the 38 years since her last visit. Her anguish has been her constant companion for so long, it seems at first that the change of scenery, and the ministrations of family and friends, won’t shake her free of it. But Mariko stays devoted to her sister’s recovery, and gradually begins to break through Suchie’s grief. Working in the garden and reducing her tranquilizer intake — as well as taking daily walks — eventually begin to restore both her health and her sanity. 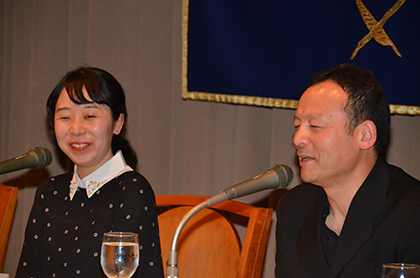 Sakaguchi responds to a question about the "not-shy" intimacy of certain scenes.

The director was asked what prompted him to begin shooting. “I saw the reflection of my mother in my camera lens, and she looked so fragile, sitting by the window,” Sakaguchi recalled. “I had mixed feelings, because I loved her, but [having to take care of her] was stripping away my freedom. The situation left me so frustrated, that I felt I might actually strike her. That’s where the camera came in handy. The distance of having to focus saved me.”

Walking with My Mother doesn’t shy away from presenting the most private, borderline queasy, moments, but the director felt it was necessary to provide an utterly unflinching depiction of his mother’s breakthrough, although he didn’t realize there would be a happy ending when he first began filming her. His intimate portrait is more than just a home movie; it has provided us with a universal example of the types of social challenges now pressing on Japan’s future, particularly in terms of its aging society and the provision of health services.

To a question regarding the adequacy of those services in the case of his mother’s care, Sakagami noted, “[My parents’ generation was the first wave] and the second wave will hit in 2025, when the baby boomers will be in their 70s. I think it’s going to hit Japan like a huge tsunami. Luckily, my mother was insured under the National Health system, so she was able to receive relatively good services. But I’m concerned about all those who won’t be able to receive such services in the future.”

He also expressed his concern over the fact that so many of the elderly are not able to go back to their hometowns, as his mother was, and are dying in Tokyo, often alone. To that end, Sakaguchi provided a Director’s Statement to the audience, which included a list of 10 steps that could vastly improve the lives of loved ones. 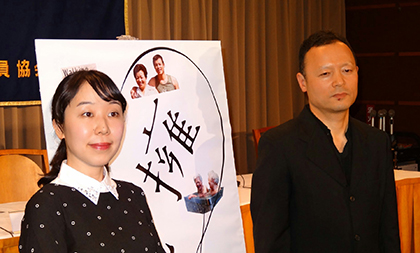 Ochiai and Sakaguchi with the poster for the film.

“If I were to give one piece of advice to caregivers,” Sakaguchi concluded, “do what you’re good at. I’m a director, so I used my camera. But if you’re a cook, cook for your parent. If you’re a tailor, sew something for them. And do it with abandon. Throw yourself into it.”

One of the most talked-about films at the 2014 Tokyo International Film Festival, where it was an official selection in the Japanese Cinema Splash section and the only documentary being screened, Walking with My Mother has just been announced as the Opening film in the Competition section of the Nippon Connection film festival in Frankfurt, Germany, to be held in mid-June.

The other piece of good news is that Walking with My Mother will be shown with English subtitles at all screenings during its run from April 25 at Image Forum in Shibuya. Spread the word! 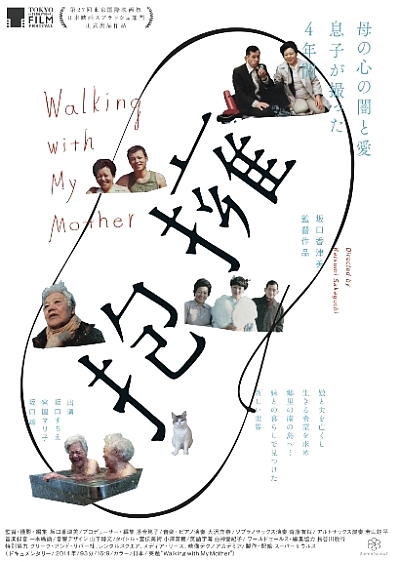