The second edition of Hidden Horrors: Japanese War Crimes in World War II documents little-known wartime Japanese atrocities during World War II. Yuki Tanaka’s case studies, remarkably original and significant, include cannibalism; the slaughter and starvation of prisoners of war; the rape, sex slavery, and murder of noncombatants; and biological warfare experiments. This new edition also includes a powerful chapter on the island of Nauru in the South Pacific, where thirty-nine leprosy patients were killed and thousands of Naurans were ill-treated and forced to leave their homes.

Without denying individual and national responsibility, the author explores individual atrocities in their broader social, psychological, and institutional milieu and places Japanese behavior during the war in the broader context of the dehumanization of men at war. In his substantially revised conclusion, Tanaka brings in significant new interpretations to explain why Japanese imperial forces were so brutal, tracing the historical processes that created such a unique military structure and ideology. The author also investigates why a strong awareness of their collective responsibility for wartime atrocities has been and still is lacking among the Japanese. To answer this question, he points to the fact that both the U.S. and Japan exploited the tremendously destructive and lethal power of the atomic bomb for their respective political justifications for ending the war.

Hidden Horrors was originally published by Westview Press in 1996, and has since been widely read in English speaking countries including the U.S., the U.K. and Australia. It has also provided extensive background material for various TV documentary films including a 2000 BBC documentary series, Horror in the East. Due to strong and continuous interest, the second edition, which includes substantial revisions and an additional chapter, was published by Rowman & Littlefield in 2017.

After teaching and conducting research for almost twenty years at several different universities in Australia, in 2002 the author took up a research professorship at the Hiroshima Peace Institute (HPI) of Hiroshima City University. In 2008, he was visiting professor at Birkbeck College, University of London, and the Sir Ninian Stephen Visiting Scholar at the Asia Pacific Center for Military Law at the University of Melbourne. He retired from the HPI in 2015 and now lives in Melbourne, Australia. His books include Japan’s Comfort Women: Sexual Slavery and Prostitution during World War II and the US Occupation (2002). He has published many books and articles in Japanese, including検証「戦後民主主義」なぜわたしたちは戦争責任問題を解決できないのか (An Examination of Japan’s Post-War Democracy: Why we cannot solve the problem of war responsibility) published by San-ichi Shobo (三一書房) in May 2019.

The library committee is offering a cocktail party - "Meet the Author - starting at 6:15 pm, followed by a set dinner with one drink at 6:40 pm (Menu: TBD). Drinks can be ordered on a cash basis from the bar in the room. Book Break charges are 3,100 yen / 4,100 yen (members/non-members) per person. The member price is applicable to members’ guests. 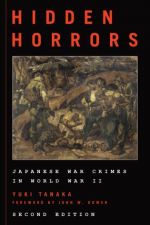