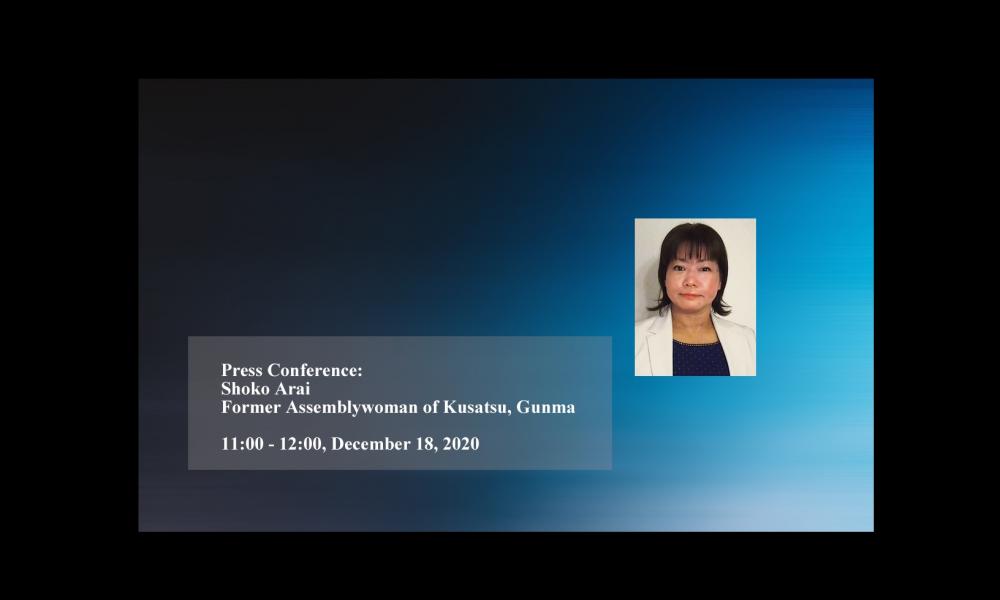 Until her dismissal in a recall election on December 6, Shoko Arai, 51, was the only female member of the city assembly in Gunma prefecture's hot spring town of Kusatsu.

Arai has alleged that the town's mayor, Tadanobu Kuroiwa, 73, groped her during a meeting at his office on January 8, 2015, and asked her indecent questions about her private life. The mayor denies the allegations, has filed a defamation suit against Arai, and claims that Arai and her colleagues are seeking to remove him from office on "baseless" accusations.

After Arai published her story in an e-book last year, Kuroiwa filed a libel complaint with police. Arai was expelled from the assembly in December 2019, with other members saying that she had hurt the city's dignity. Kuroiwa claimed that Arai's remarks, including allegations that town women were "treated as objects" and often became mistresses to powerful male resort owners to gain privileges, brought shame on the town.

Arai claimed that Kusatsu's male-dominated political system, spearheaded by the mayor and the town's influential business figures, punished her for speaking out. In August, the Gunma prefectural government ruled that her initial expulsion by the assembly was illegal, and subsequently restored her assembly seat.

Unhappy with the prefectural government's ruling, Mayor Kuroiwa and members of the council led calls for a referendum by city residents for a recall.

In the interests of impartiality, the FCCJ invited both politicians to speak at the Club this week. Mayor Kuroiwa spoke on Monday. Now Arai is set to respond.

Please register at front@fccj.or.jp with your name, name of media outlet, FCCJ membership number. Due to space restrictions, please note there will be a limited number of reservations to attend. Doors open at 10:30. Please sign in your name and contact details at the reception with your own pen and to have your temperature taken before proceeding.

How to watch online: https://www.youtube.com/channel/UCe8K6odES9H0wSq71vppauA/live

Livestreaming of the press events will be available and video of this event will be uploaded to our FCCJ YouTube channel.

Members watching the event online can submit questions for the speakers in advance using this submission form (English only).

TV crew: Please make a reservation at front@fccj.or.jp. Door open for TV crews only at 10:15. There will be five positions available for livestreaming.