The Jaime Jazz plus guests

This real life married couple of Tommy Jaime and Mizuki Maruoka Jaime play together as a piano and bass duo! Usually they play jazz standards for weddings, parties, or other events, but in a concert setting they like to play jazzy versions of famous movie and TV music! This time, to help everyone get into the holiday spirit, they will play Christmas standards and arrangements! As usual, they'll be joined by:

Eiko Takada – Violinist. Eiko started playing violin at the age of 3. She joined the Music School for Children associated with Toho Gakuen School for Music at the age of 6. In 1996, she played the Mozart Violin Concerto No. 3 as a soloist for the 20th anniversary concert for the establishment of JASTA(Japan String Teachers Association). Since then she has only been getting better! In 2014, Eiko became a certified teacher of the Suzuki Method.

Won Song Kim – Guitarist. In 2014, Won Song arranged for and recorded with Karen Aoki. That album, Eternal Melody, reached No. 1 on the iTunes and Tsutaya jazz charts. In 2017, he released his own album titled The Way of the Light, which lead to a successful tour in France in June of that year. As a guitarist, he's competent as a solo accompanist or as a band member in all genres on both acoustic & electric. 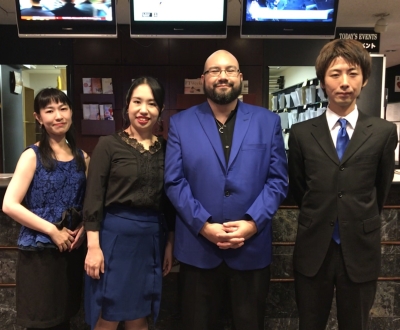 Coming up!
December 19 The Chris Grundy Connexion
December 26 NO SNL