Alcohol will be served and SNL is back!!

Michael Fogarty from the USA is a session keyboard player, singer songwriter, producer/arranger who owns and operates infiniti studios Chiba. He has toured with the James Gang, Joe Walsh, Major Lance, as a hired gun for the William Morris Agency and recorded sessions with Mick Fleetwood, Simon Philips, Peter Green, and was signed by Atlantic Records as the principal songwriter/singer for the Jeremy Spencer Band (Fleetwood Mac Rock and Roll Hall of Fame).

Mike Marrington, from Australia is a producer, arranger, multi-instrumentalist and has toured with SMAP, SEKAI NO OWARI, and is a member of the group SHAMANZ. He is very active on the Tokyo music scene and is a session drummer for many artists.

Jeff Curry, from the USA,  is a bassist, band leader, composer and arranger. He has been recorded on many video game soundtracks, original projects and as a session player for many Japanese artists. Many of Jeff's original songs can be heard on television and film worldwide.
Please join us for an evening of soulful ballads, smooth jazz, originals, funk, and fun.

And remember, it's FREE. Never a music charge. Never a cover charge. It's the best
Saturday night deal in all of Tokyo! (NO RESERVATION REQUIRED) 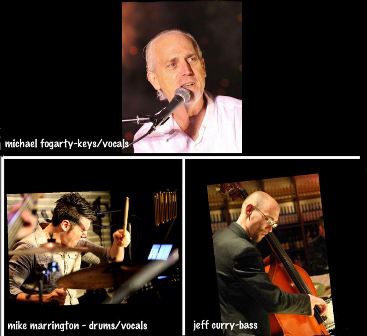