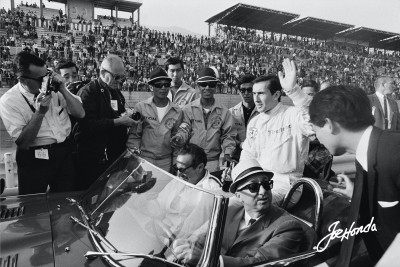 Total Recall brings to life memories from motorsport's golden age through a series of historic and rare photographs from Joe Honda's rediscovered archive.

In partnership with award-winning photo laboratory Shashin Kosha, the exhibition shines a light on Japan's first international race at the Fuji Speedway in 1966 and the nation's emergence on the global motorsport scene. To the Japanese cognoscenti, the American Indianapolis 500 was a celebrated race, and hosting the first international indy event in Japan would signal their country's arrival as an industrial power.

When 26-year-old Honda went to document that race, he never expected it would change the course of his life. But a chance encounter with British driver Jackie Stewart at the Fuji Speedway that day triggered his resolve to venture abroad to document the people, culture and technology at the heart of the global motorsport scene.

Born in 1939, Joe Honda graduated from Nihon University's Department of Fine Art. Over a prolific career spanning 50 years, he captured everything from Formula One and NASCAR to motocross and the Paris-Dakar rallies. In 1967, he became the regional representative of the International Racing Press Association (IRPA) and the first Asian to capture the international motorsport scene. Honda has exhibited in major salons such as the Nikon and Canon art galleries in Tokyo and published extensively on Formula One and the automotive industry.
www.joehonda.com  www.facebook.com/joehondahisworks