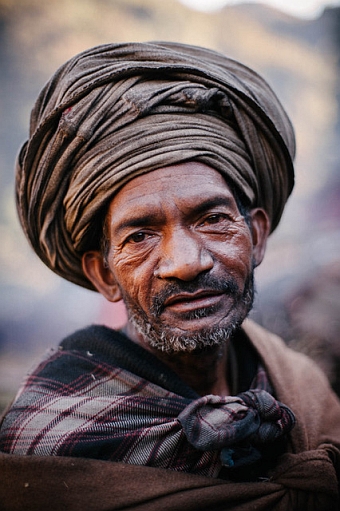 In the lush hills of western Nepal that intersect at the junction of harsh Himalayan mountains and wide North Indian plains, there is an ethnic group living a wandering life between edge of the wild nature and human habitation. They are called the Raute, “the kings of the forest”. Speaking Khamchi, their native language, they have chosen to live a nomadic life instead of settling in one location and farming. The Raute people are hunter-gatherers surviving on a diet of jungle monkeys and other wildlife as they traverse between the natural environment and the outskirts of civilization. The tribe exchanges wooden containers carved from trees for provisions from traders and village farmers.

The modern world is making its way even to the tiny villages of deep inside of Himalayas. But the Raute continue to maintain their lifestyle even though they are aware of modern conveniences like electricity, fuel, automobiles, TV, mobile phones, and concrete, along with the benefits of medical care, and education. They are resolved to continue with their way of life, however the environment surrounding them has changed dramatically due to increased settlements, deforestation, vegetation changes, and friction from local communities. It is said that there were once thousands of Raute from five groups scattered around India to Nepal, but today only about 160 members from one group remain. How much longer will they be able to continue their way of life? Where they heading to in the future?

Bio :Masaru “JUMBO” Kadotani / documentary photographer & videographer
Born in Kobe, Japan in 1982, the nickname, "JUMBO," comes from his robust physique built from mountain training, as well as his unflappable character. He accompanied Japanese adventurer and extreme skier Yuichiro Miura on a mountain expedition to the Himalayas when he was 18 years old. That experience led him to be enthralled by the great nature of the Himalayans and the diverse ethnic cultures nurtured by the rich geographical environment of Nepal. He also witnessed a lot of the tragic social problems caused by “JAAT," the traditional caste system and poverty through his visits. As a photographer, he transpires to express the "beauty of the humans as an animal" that goes beyond the preconceived sense of values of right or wrong. Currently active in a wide range of documentary and promotional photography & video filming in the frontiers and mountainous regions all over the world. He also works on his own documentary projects focused on mountaineers and climbers challenging the peaks, the folklore of not well-known ethnic groups, and people who strive in the midst of social problem.