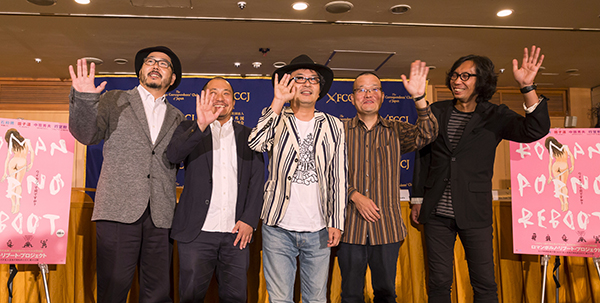 The 5 reboot directors together for the first time ever: from left, Shiota, Shiraishi, Sono, Nakata, Yukisada. ©Mance Thompson

The reboot, according to the studio, “revives [Nikkatsu’s] function as a sandbox for playful experimentation with the aim of attaining new forms of cinematic expression.”

The venerable Nikkatsu Studio was facing bankruptcy in 1971 when it decided to shift production from action and gangster films to mid- length “romantic pornography,” or story-driven tales with copious sex. Tremendously popular with audiences and critics alike, the series stretched to nearly 1,100 titles before competition from straight-to-video adult films put an end to it in 1988. Acclaimed directors like Shinji Somai (Sailor Suit and Machine Gun), Kichitaro Negishi (Villon’s Wife) and Shusuke Kaneko (Death Note) all worked for Nikkatsu at the start of their careers. Others, like Tatsumi Kumashiro, Noboru Tanaka and Masaru Konuma, became masters of the genre, admired overseas as well as at home.

And so, businesslike, the studio selected directors who have built enviable fan bases alternating between studio and indie films. Hideo Nakata, of course, is considered the father of J-horror, having unleashed Ringu (1998) and Dark Water (2002) upon the world, following up with a fistful of chillers like his latest, Ghost Theater. Akihiko Shiota is known for his offbeat takes on the coming-of-age drama, as in his award-winning Harmful Insect (2002), but he’s also made such domestic blockbusters as Yomigaeri (2003) and Dororo (2007). The youngest of the bunch, Kazuya Shiraishi, has brought an unsettling sensibility to his three dark, moody features, Lost Paradise in Tokyo (2010), Devil’s Path (2013) and this year’s delirious corrupt-cop thriller, Twisted Justice. Sion Sono has courted controversy even while sweeping up awards overseas for his prolific, often outrageous output, from Love Exposure (2009) and Cold Fish (2010) to Tokyo Tribe (2014), although his latest, Whispering Star, is placidity personified. Isao Yukisada, a stylish master of high-gloss commercial features concerned with memory and identity, had a megahit with Go (2001), broke all box office records with Crying Out Love in the Center of the World (2004), and just had another hit with this year’s Pink and Gray. 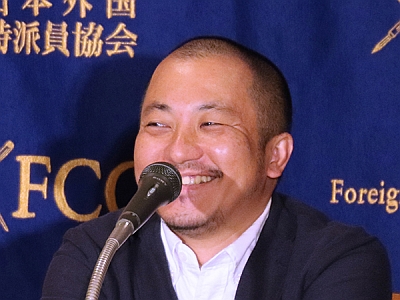 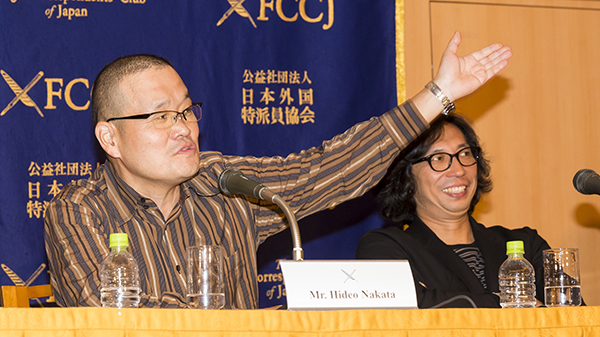 Asked whether they had a particular audience in mind when making their films, the directors all turned immediately to the question of gender.

Shiota, whose film had world premiered at the Locarno Film Festival and received an award, said that he’d been struck by how female audiences responded. “It received attention from women in their 20s and up to their 60s,” he said, “and I discovered happily that women also want to see this kind of film.”

Admitted Sono, “In recent years, I’ve been harboring this anger toward the nation and other issues. I think my film is really about anger, especially aggravation and anger toward myself. You really don’t have to come see my film. I didn’t have any particular audience in mind.”

Each of the directors also responded to a question about creative freedom in the industry as a whole, transforming the Q&A into a mini- Master Class in filmmaking.

Said Shiota: “I think all directors know that it’s a given that there really isn’t any freedom in the film industry. A film never goes the way you envision it — you may not always get the casting right and the script may change. You won’t have a choice about where and when to shoot it… and we also had restrictions imposed on us by the Roman Porno quota of sex scenes. But these restrictions provide a springboard for filmmakers’ creativity… That’s the history of B pictures, working with low budgets and other restrictions. I think what Nikkatsu is doing right now is giving directors the opportunity to create their own projects, as long as they abide by the restrictions. It’s a wonderful opportunity and that’s why I think the project is so great.”

Shiraishi lamented, “Right now in the Japanese film industry, it’s all about commercial success. Commercial success is all about whether the original novel or original manga has sold tens of thousands of copies, and about who’s in the cast. I don’t think that’s all that films are about. It’s important to bring originality to film projects.” 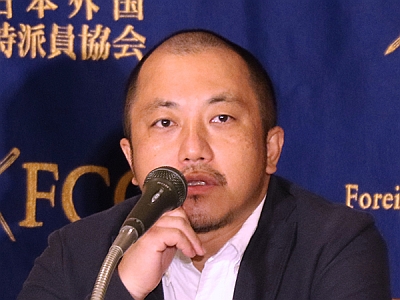 But Nakata sounded a note of caution: “I must say, if you were able to have anything you desired, life would be boring. The same is true of filmmaking. If you have no time restrictions, no financial restrictions, no schedule restrictions, it would be quite boring. Within certain parameters, comes creativity. Speaking about the current Japanese film industry, the bigger the studio is, the more difficult it is for executives to say ‘yes’ to a film. Of course a film has to make money, that’s what Hollywood says: if the film won’t make money, don't make it. In that sense, Japan is becoming a mini-Hollywood. But there are also a lot of people making films very freely in America, and I really envy that.”

Reminding the audience that Nikkatsu had turned down his first script, Yukisada said, “I think there’s a bit of studio distrust of filmmakers. And maybe that’s because the studios think we’re trying to arm-wrestle them, to trick them into making films our way. Whenever I make a commercial film, I feel this watchful eye, and I get paranoid. It’s senseless. I wish we could understand each other better. But on the other hand, when a studio says you can do whatever you want, that’s a lot of pressure, too. This experience with Nikkatsu, with restrictions, was an extraordinary experience, actually. My regular crew worked with me and we were surprised at how speedily and efficiently it all went.”

Set in 1918 against the backdrop of the rice riots rocking Japan — with abrupt inserts reminding us also of the Korean uprisings and Russia's October Revolution — The World of Geisha is unabashedly political, as well as sumptuously beautiful, emotionally engrossing, sexy and often downright hilarious. Kafu Nagai’s original lines are sprinkled throughout, providing helpful context for the milieu, such as: “A quick snack outside the home now and then spices up the menu. Wives should understand and not get jealous.” The film’s opening love-making session lasts for over a third of the total running time, interspersed with subplots involving other geisha and their clients, and the film often features Kumashiro’s trademark “indictment of the hypocrisy of censorship” — black placards blocking certain naughty bits, and clever use of “xxx” in the Japanese titles appearing onscreen. 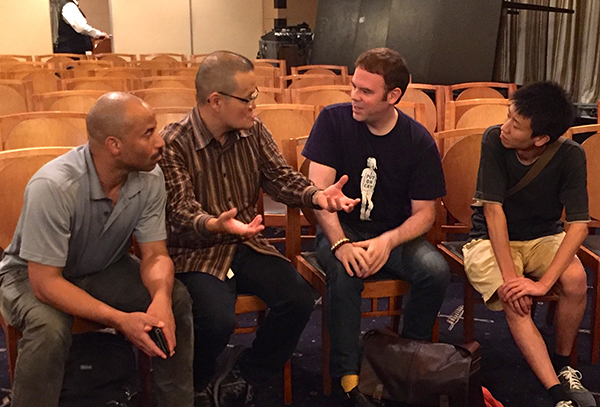 *There was no chance to ask this during the Q&A, but off stage, I spoke with producer Saori Nishio, one of two female producers on the reboot project. The explanation turned out to be both simple and stunning: timing. They had planned to include a female director, said Nishio, but each of their candidates had either just gotten pregnant, just given birth or was pregnant when the project was beginning. One hopes a hormone hurricane won’t interrupt attempts to include a female director in the next batch of films. 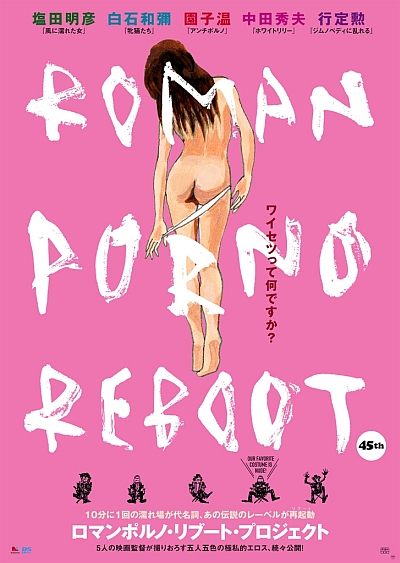