PIETA IN THE TOILET (Toire no Pieta)

PIETA IN THE TOILET

The talented trio faces the press.

For a film programmer, there is nothing quite so satisfying as being able to contribute, however insignificantly, to the launch of an independent film that deserves to be seen and celebrated far more widely than its modest budget may allow. Such was the case with FCCJ’ s screening of Pietà in the Toilet, the feature-fiction debut of award-winning documentary director Daishi Matsunaga (Pyuupiru, Gospel).

Inspired by the final story idea of Japan’s great God of Comics, Osamu Tezuka (Astro Boy, Kimba the White Lion), who jotted the outlines of Pietà down on his last diary page before dying of stomach cancer in 1989, Matsunaga has created a big-screen treatment that is by turns distressing, blackly humorous and uplifting — a poignant consideration of life under the looming hand of death. Nearly as impressively, he has directed a handful of major movie stars (Lily Franky, Rie Miyazawa, Shinobu Otake) with the assurance of a seasoned pro, and guided two unknowns in the lead roles who achieve an onscreen chemistry that is a real rarity.

Making his acting debut, real-life rock star Yojiro Noda (Radwimps) is perfectly cast as a lost young man who is rescued from his ennui and emptiness by Hana Sugisaki, a teen actress whose slim TV and film credits could not possibly predict the sheer bravado of her revelatory performance in Pietà. Just 16 years old during filming, Sugisaki delivers a truly star-making turn.

In Matsunaga’s adaptation of Tezuka’s story fragment, Noda plays young cancer patient Hiroshi Sonoda, who receives a fatal cancer diagnosis and decides to die without a fight. Once a promising art student, he’d quit painting after an unhappy love affair, and he’s been washing windows ever since. But after fainting on the job, he finds himself in the hospital, where he meets two people who will shake him out of his stupor: Toru Yokota (Franky), a long-term cancer patient who gets his kicks from photographing nurses and nubile visitors; and Mai (Sugisaki), a schoolgirl with serious attitude and a death wish. Hiroshi, weakened by chemotherapy and growing superstitious in the way of many victims of hopeless situations, begins to think he can survive if only he makes someone happy — and Mai, precocious, tortured and desperately lonely, is his willing target. As a chaste love affair blooms, Hiroshi is inspired to pick up his brush. With Yokota’s help, he begins painting the pietà on the walls of his toilet, a final act of defiance and redemption. 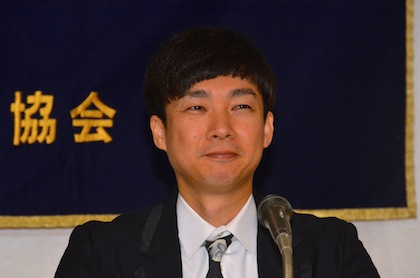 Matsunaga's facility with actors might be a result of his own experiences:
he began his film career as one of the Waterboys.

When queried about how he managed to snag such a big-name cast, as well as how he found his leads, Matsunaga explained that he and his producers (Shinji Ogawa of BridgeHead and Morio Amagi of CineBazar) had wanted someone who was a creative artist for the character of Hiroshi. Eventually, they decided to reach out to singers, and Matsunaga felt an instant rapport with Noda. “As I listened to his lyrics and songs… I found him to be very sexy and intriguing, and his songs expressed something similar to the worldview that I hoped to capture.” Conveniently, Noda also wrote and performed the theme song for the film. 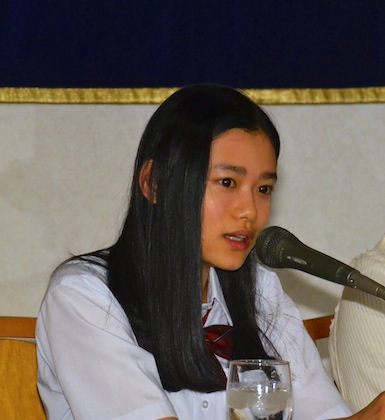 Hana, a rising star, skipped her school trip to be at the FCCJ screening.

As for the “equally important” role of Mai, Matsunaga “held auditions for a full year, and from the beginning, Hana Sugisaki was very impressive. I narrowed it down to 5 -10 actresses, and asked Yojiro to come in and read against them. When I saw how he and Hana played off each other, and changed each other, I was convinced to cast her.”

Sugisaki surprised the FCCJ audience by being as demure and soft-spoken during the Q&A session as her character is bold and outspoken in the film. She discussed the audition and rehearsal processes, the difficulty of “capturing Mai,” and the frustrating process of building confidence. “I think I was able to do this because I trusted [the director and my costar],” she said. After a particularly lengthy series of takes one day, “Matsunaga-san came to me and said ‘You finally captured Mai,’ and from then on, I was able to interact with Yojiro as if he was Hiroshi and I was Mai. The character stayed inside me for a full month after filming was done.” 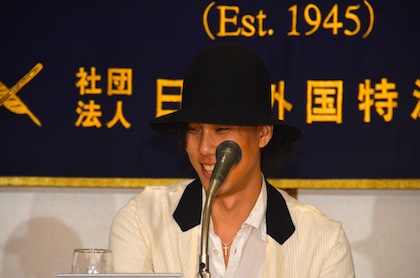 Yojiro rocks the audience with his superb English,

Noda also surprised the FCCJ audience — and the sizable contingent of Japanese press, most of whom were there because of the Radwimps singer-songwriter’s enormous popularity — by speaking in fluent American English: “Thank you for inviting us here tonight, we’re very pleased to be here. It’s been 10 years since Daishi Matsunaga [heard] this story, and it’s been a long way here. This was my very first acting experience, and it was awesome to work with these incredible talents. I was very honored. I hope you enjoyed the film, and if you did, please help spread the Pietà world to other audiences. Thank you.” (Noda lived in the US for 4 years as a youth, and says he maintains his English through producing work with non-Japanese singers and touring abroad with his band.) 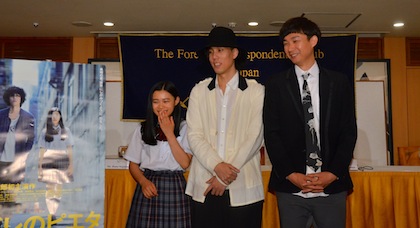 Fans of Osamu Tezuka, many of whom have waited 25 years to see his final story come to life, and fans of exceptional new acting and filmmaking talent: Pietà in the Toilet is for you. You’ll be seeing a lot more of Daishi Matsunaga, Yojiro Noda and Hana Sugisaki in the future; this is where it all began. 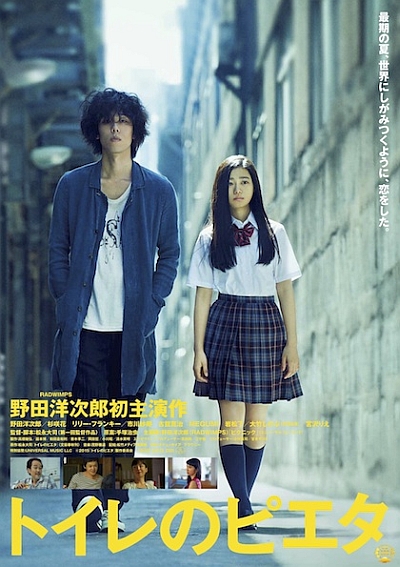