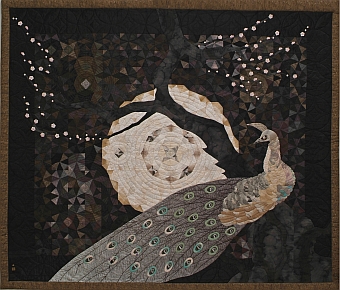 Mutsuko Yawatagaki is a native of Shimane Prefecture, a beautiful part of western Japan along the Japan Sea coast. It is one of the least populous and least visited areas of the country yet figures prominently in early chronicles and mythology as the very birthplace of Japan. Drawing inspiration from this rich local culture, Yawatagaki creates large-scale pictorial wall hangings using a combination of western and Asian handwork techniques. She works almost exclusively with traditional Japanese fabrics, carefully salvaged from antique kimono and obi that are themselves works of art.

In repurposing kimono, Yawatagaki gives new life to fabric that is no longer worn and enjoyed. She hopes people will see, in her works, not only what she has created but also the contributions of the many artisans who had a part in the making of each kimono. Many of the silks have woven patterns of auspicious motifs such as tortoises and cranes. Not only are they imbued with meaning, but they change with the light, lending further interest to the compositions.

In 2006, Yawatagaki renovated a 200-year-old traditional residence and opened the Izumo Museum of Quilt Art, where her works are presented as installations complemented by imaginative flower arrangements. Her work has been exhibited in major museums, including the Museum of Contemporary Art, Tokyo, and the National Quilting Museum in Kentucky.  In 2013, she collaborated with Belgian artist Daniel Ost on a special exhibition to commemorate the Heisei Dai-sengu ritual rebuilding of the Grand Shrine of Izumo.