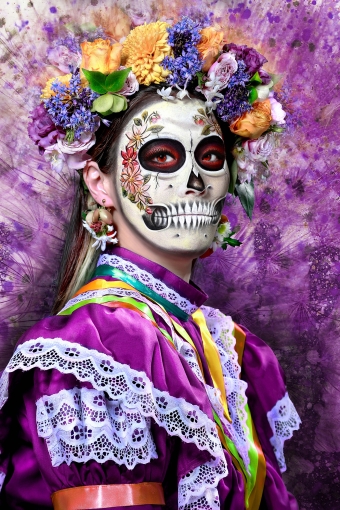 Our exhibition aims to publicize this celebration through 23 images of Catrinas and Catrines, representing elements of the offering and the conception of the Day of the Dead, Intangible Cultural Heritage of Humanity by the United Nations Organization for Education, Science and Culture (UNESCO), since 2008.

About us:
Rodrigo Reyes Marin is a Mexican photojournalist based in Tokyo since 2008. In Mexico, he worked for print and electronic media. After coming to Japan in 2011, he started collaborating with photo agencies in Japan and abroad, such as AFLO, ZUMA Press, etc.

Nahomi Moriyama is a Graphic Designer specializing in photo retouching with 25 years of experience. She was born to Japanese parents in Uruguay, and thanks to a JICA scholarship (at age 22), she moved to Japan, where she studied graphic design in Hokkaido. Nahomi is an Ikebana teacher, and thanks to her previous experience in painting, she learned and practiced catrina makeup for five years, to later undertake -together with Rodrigo- the photographic project: The Catrinas of Japan. Nahomi works for a jewelry company as a professional retoucher.

Catholic Mourning: A portrait of Catrina wearing a purple traditional dress (from the State of Jalisco) which represents the catholic mourning in the Day of the Dead celebrations in Mexico.